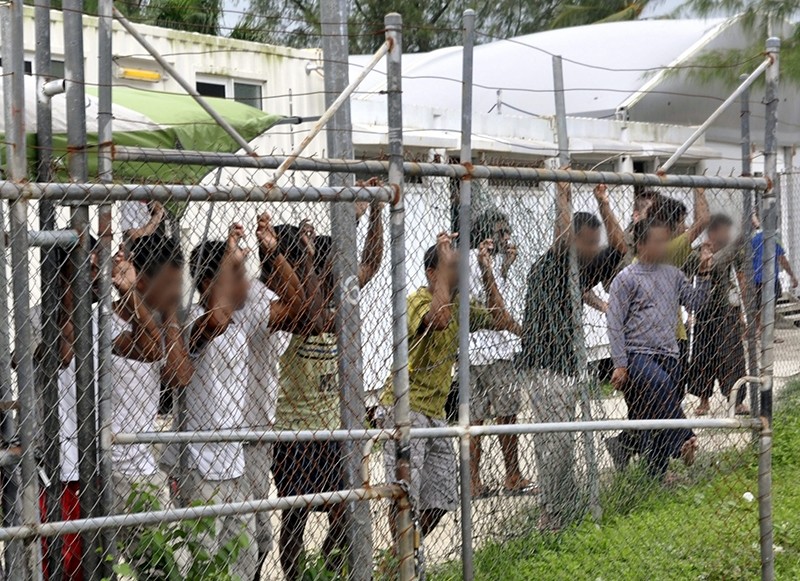 Asylum seekers staring at media from behind a fence at the Oscar compound in the Manus Island detention center, Papua New Guinea, March 21, 2014. (EPA Photo)
by Compiled from Wire Services May 22, 2018 12:00 am

A Rohingya refugee from Myanmar died Tuesday after jumping from a bus on a remote Papua New Guinea island, almost five years after he was sent there by Australia, officials said.

Canberra has sent asylum-seekers who try to enter the country by boat to camps on PNG's Manus Island or Nauru in the Pacific for processing, with those found to be refugees barred from resettling in Australia.

The harsh policy is meant to deter people embarking on treacherous sea journeys, but the United Nations and other rights groups have criticized the camps' conditions and long detention periods.

Australia's home affairs department confirmed the death but did not provide further details.

The Refugee Action Coalition's Ian Rintoul told AFP the man, a 52-year-old called Salim, was believed to have jumped from a moving bus near a refugee transition center and was struck by its wheels, dying at the scene.

Most asylum-seekers on Manus believed the man's death was a suicide, according to a statement from the coalition.

He was the seventh asylum-seeker to die on Manus since Canberra's offshore detention regime began in July 2013, in addition to three others who died on Nauru over the same period, Rintoul said.

"The Rohingyan refugee had suffered for a long time with a medical problem" and had previously been sent to Australia for treatment, he added in a statement.

Behrouz Boochani, an Iranian refugee on Manus, tweeted Tuesday that Salim had epilepsy and was "suffering for a long time."

Previous deaths on Manus include an Iranian refugee found hanging from a tree near a school in August last year, and a Sri Lankan Tamil asylum-seeker who reportedly committed suicide at a hospital two months later.

The detention centers have made headlines due to reports of rape, security lapses, poor conditions, and the uncertainty surrounding detainees' future.

The Australian camp on Manus was shut late last year after a PNG court ruled it was unconstitutional, with the 600 detainees sent to three transition centers.

Canberra has sought to offload those recognized as refugees to third countries such as the U.S., and more than a hundred have been resettled there, according to reports.

But hundreds of others remain on Manus, saying they feared for their safety amid hostility from the local population, and that their basic needs such as healthcare were not being met.

"With the passage of too many years and the withdrawal or reduction of essential services, the already critical situation for refugees most in need continues to deteriorate," UNHCR's regional representative Nai Jit Lam said.

The Rohingya, described by the U.N. as the world's most persecuted people, have faced heightened fears of attack since dozens were killed in communal violence in 2012 in Myanmar's Rakhine state.