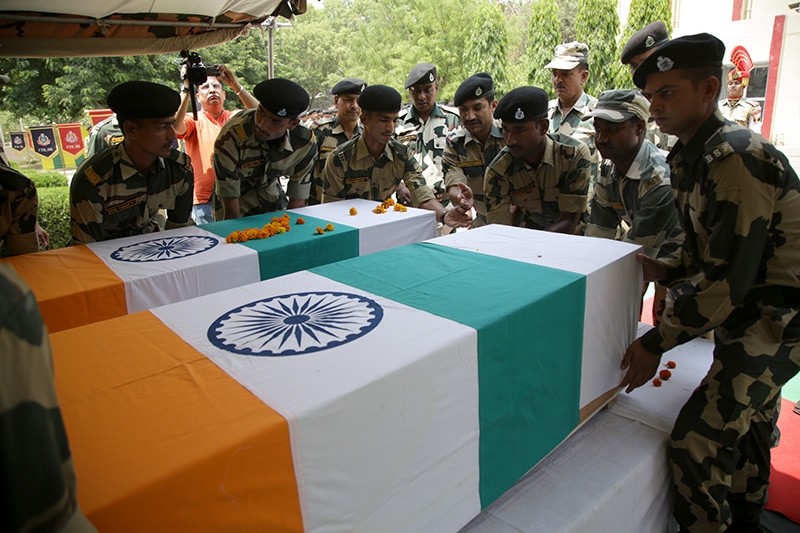 Indian Border Security Force (BSF) soldiers place the coffins of two soldiers killed in an alleged firing from the Pakistan side in Akhnoor sector, during a tribute-paying ceremony at the BSF headquarters in Jammu, India, June 3, 2018. (EPA Photo)
by Jun 03, 2018 12:00 am

India and Pakistan exchanged fire across the Kashmir border on Sunday, officials said, killing two guards and ending a daysold agreement to honor a cease-fire in the disputed region.

Seven civilians were also injured at Aknoor, near the contested territory's border with Pakistan, in a barrage that claimed the lives of two Indian border officers.

India's Border Security Force said its troops returned fire after Pakistani border rangers in Sialkot fired into Kashmir without provocation in the early hours of Sunday.

"The injured soldiers were immediately evacuated to a military hospital where they later succumbed (to their injuries)," border force spokesman Manoj Yadav told AFP from Jammu, the winter capital of the restive Himalayan region.

Pakistan authorities did not immediately comment on India's allegations or whether any damage was sustained on their side of the border.

The salvo of gun and mortar fire came just four days after Pakistan and India promised to end cease-fire violations in Kashmir.

The two sides had pledged to respect the conditions laid out in a 2003 cease-fire "in letter and spirit" following some of the highest levels of violence in Kashmir since the pact was signed.

Both sides blame each other for violating the 15-year cease-fire.

Dozens have been killed in border clashes in recent months along the border that divides the territory into zones of Indian and Pakistani control, leaving residents terrified.

The renewed commitment to the cease-fire had encouraged thousands of civilians to return to their homes after weeks of shelling.

Kashmir has been divided since the end of British colonial rule in 1947 and both New Delhi and Islamabad claim the former Himalayan kingdom in full.

India has about 500,000 soldiers in the part of Kashmir it controls, where armed groups are fighting for independence or a merger with Pakistan.

The flare-up along the border comes amid a rise in street riots and militant violence in the Kashmir valley, which witnesses near-daily demonstrations against Indian rule.

New Delhi accuses Pakistan of fueling an insurgency that has left tens of thousands of civilians dead. Islamabad denies this, saying it only provides diplomatic support to Kashmiris' right to self-determination.