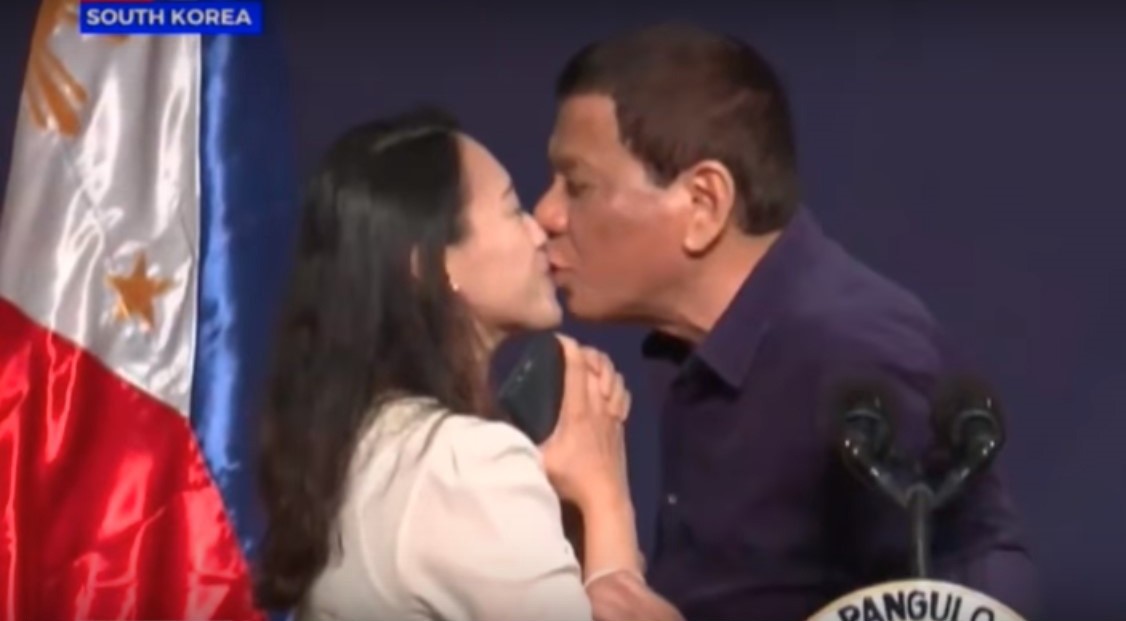 Philippine President Rodrigo Duterte has drawn criticism for kissing a woman on the lips during a meeting with the Filipino community in Seoul during an official visit to South Korea.

Duterte gave out a copy of a book on alleged corruption in the Catholic Church in the Philippines to the crowd on Sunday, saying a woman should get it because he wanted a kiss in exchange.

"No men, the price for this is a kiss," he said, while calling out to a woman in white from the cheering crowd, "Are you ready to kiss?"

Two women went up the stage, and Duterte told them to share the book.

The 73-year-old president gave one of the woman a peck on the cheek, but signaled to the other woman that he wanted a kiss on the lips.

"Are you single? You're not separated? But can you tell him that this is just a joke?" Duterte was heard telling the woman before kissing her on the lips and embracing her after.

While the crowd at the meeting cheered and laughed, other Filipinos took to social media to criticize Duterte's act.

The kiss was described as "disgusting," "gross" and "cringe-worthy."

Former solicitor general Florin Hilbay said the act was something that should not be emulated, adding, "This is that path that normalizes misogyny."

Opposition Congressman Gary Alejano also lamented what happened, saying, "The measure of a true man is not how he abuses women but how he respects their rights and person."

The woman, who is married to a South Korean and has two children, said there was no malice in the kiss, which was meant "to entertain and excite the audience."

Gabriela, a women's political party, said it was unfortunate that the women had to defend the "disgusting theatrics" of Duterte, who felt "entitled to demean, humiliate or disrespect women according to his whim."

"Such acts of President Duterte are only intended to divert the people from the real and pressing issues of the country," it added in a statement. "His repeated acts of machismo is meant as entertainment to hide the reality of his rapidly slipping popularity."

Duterte has in the past been accused of making sexist, misogynistic and disrespectful comments against women, including making rape jokes, questioning their integrity and even telling soldiers to shoot female rebels' genitals.