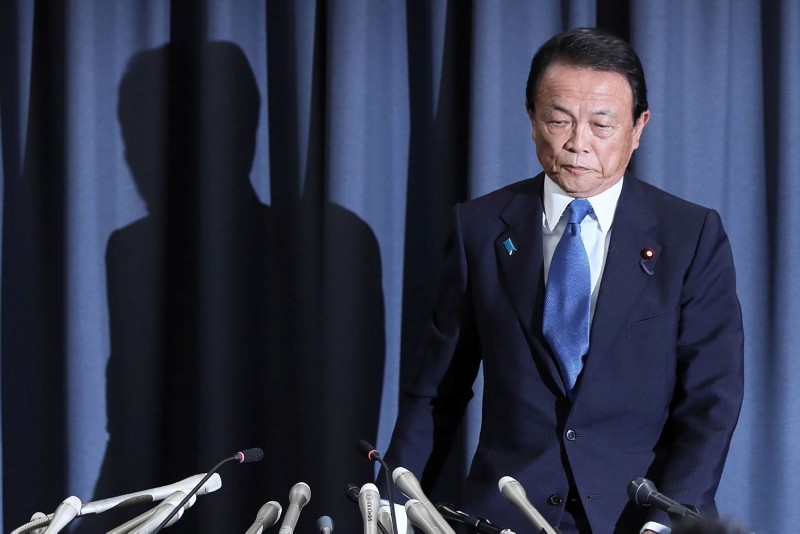 But he ruled out resigning after it emerged ministry officials had removed hundreds of references to Abe, his wife, and Aso from documents related to the sale of state land at below-market prices.

"I am voluntarily returning 12 months of my salary as a cabinet minister, as this problem has hurt public confidence in the finance ministry and the administration as a whole," Taro Aso told reporters.

But he added, "I am not thinking about stepping down", as he announced the findings of the ministry's in-house probe.

Aso is the richest minister in Abe's cabinet because of his family's massive fortune made in the mining business. He also earns some 30 million yen ($274,000) a year as a cabinet minister.

Aso said the ministry had penalized around 20 officials, imposing pay cuts in some cases and issuing verbal reprimands to others.

"Officially approved administrative documents should never have been altered and submitted to parliament. I find this extremely regrettable," he said.

Abe told reporters he wanted Aso to stay on to ensure lessons were learned from the scandal.

"We should conduct a thorough review of how to keep public documents and take measures to prevent a recurrence," he said, adding that he wanted Aso "to take leadership in this and fulfil his responsibility."

Opposition leaders were not impressed.

"This has confirmed that Prime Minister Abe bears grave responsibility," Democratic Party for the People leader Yuichiro Tamaki was quoted by Kyodo news agency as telling a news conference.

The scandal revolves around the 2016 cut-price sale of state-owned land to a nationalist school operator who claims ties to Abe and his wife Akie.

Giving sworn testimony in parliament soon after he quit the ministry in March, Sagawa denied any involvement by Abe or the prime minister's office in falsifying the documents.

But the senior bureaucrat declined to answer detailed questioning about how and when documents were altered, saying he was under criminal investigation.

Prosecutors last week decided not to press charges against him.

On Monday, the finance ministry said it would reduce Sagawa's retirement pay and punished other officials involved.

Abe also faces a second cronyism scandal in which the opposition alleges he used his influence to help an old friend open a school in a special economic zone, bypassing cumbersome government regulations.

Abe, in power since late 2012, is in no imminent danger of losing his job, but the scandals have affected his popularity.

A new opinion poll released Monday showed voter support for his cabinet down 1.6 percentage points over the past month to 39 percent, the lowest level since he took office.

The finance ministry, considered the most powerful in Japan's bureaucracy, has also been rocked by a sexual abuse scandal that forced the resignation of a senior official.

Abe's allies, however, hope he can now draw a line under the controversies that have weighed on his aspirations and agenda.

Ruling party members support him for stability's sake, business leaders like his "Abenomics" policies, and rivals have so far failed to catch the imagination of the public.

That may allow Abe to win a Liberal Democratic Party leadership race planned for September, despite persistent voter doubts about the scandals, analysts and several political sources said.

"The view that Abe and his wife have lied has spread quite a bit," said one governing coalition source, speaking on condition of anonymity. "But if one thinks about replacing Abe, there is the question, who else could run a stable government?"

Just what Abe will achieve if he wins another term remains unclear, including whether he can change Japan's post-war, pacifist constitution.

"His true goal is to revise the constitution, but his coalition partner is not keen and with local and upper house elections next year, it will be difficult," the coalition source said. "He'll focus on the economy and foreign policy."

Allies are betting that Abe's ratings have bottomed out.

Both ratings were about the same as a month earlier, though both also showed a hefty majority of voters had doubts over the scandals. For now, his backing inside his party matters most.

"Almost all the stakeholders in the Abe administration want him to stay. It's up to the LDP, not the public," said Tomowaki Iwai, a political science professor at Nihon University. "If his ratings fell to 20 percent or lower, then there could be moves but for now, his support inside the LDP is high."

Abe's challengers have so far failed to benefit from his lackluster public support.

Telegenic lawmaker Shinjiro Koizumi - who at 37 most view as too young to run - topped general voters' list of politicians favored to be the next premier with 28 percent versus Abe's 24 percent in the Nikkei survey, but Abe came in first among LDP supporters with 45 percent versus 21 percent for rival Shigeru Ishiba, a former defense minister.

"It's like a slow death," said Sophia University professor Koichi Nakano. "Turning a new page, hitting bottom - I'm not so sure."