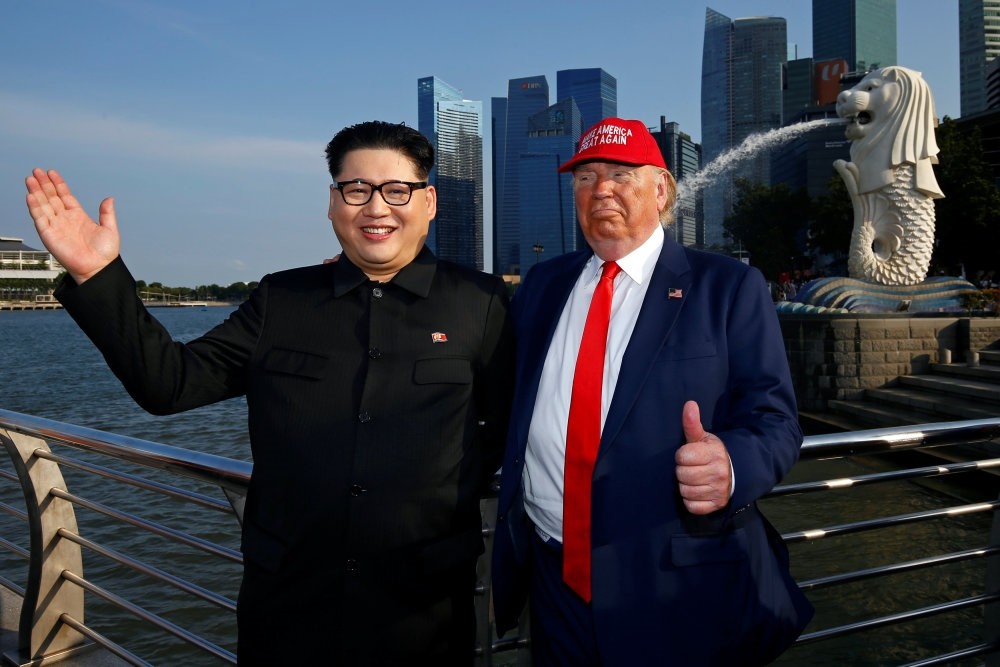 Heading into his North Korea summit with characteristic bravado, President Donald Trump says that "attitude" is more important than preparation as he looks to negotiate an accord with Kim Jong Un to denuclearize the Korean Peninsula.

He's also rebuffing any advice from Democrats, writing in a tweet Friday that they did "NOTHING" on North Korea while in charge. Senate Democratic Leader Chuck Schumer has said he's concerned that the president wants a deal so badly he might strike a bad one.

"Schumer failed with North Korea and Iran, we don't need his advice!" the president tweeted.

As the world awaits with great anticipation, in Singapore spirits seem to be high, as impersonators of both President Trump and North Korea's Kim, such as Howard X and Dennis Alan, roam the streets being photographed in comedic stances. Restaurants in the city have also taken advantage of the historic event, preparing dishes and drinks named after the American and North Korean leaders; they include the "Rocket Man" and the "El Trumpo" taco.

Preparing to depart Washington for next week's meeting, Trump dangled before Kim visions of normalized relations with the United States, economic investment and even a White House visit. Characterizing the upcoming talks with the third-generation autocrat as a "friendly negotiation," Trump said, "I really believe that Kim Jong Un wants to do something."

President Trump's comments came as he looked to reassure allies that he won't give away the store in pursuit of a legacy-defining deal with Kim, who has long sought to cast off his pariah status on the international stage. The North has faced crippling diplomatic and economic sanctions as it has advanced development of its nuclear and ballistic missile programs.

"I don't think I have to prepare very much," Trump said. "It's about attitude. It's about willingness to get things done."

Declaring the summit to be "much more than a photo-op," he predicted "a terrific success or a modified success" when he meets with Kim next Tuesday in Singapore.

He said the talks would start a process to bring about a resolution to the nuclear issue.

"I think it's not a one-meeting deal," he said. Asked how many days he's willing to stay to talk with Kim, Trump said, "One, two, three, depending on what happens."

Still he predicted he'll know very quickly whether Kim is serious about dealing with U.S. demands.

"They have to de-nuke," Trump said. "If they don't denuclearize, that will not be acceptable. And we cannot take sanctions off."

Trump, who coined the term "maximum pressure" to describe U.S. sanctions against the North, said they would be an indicator for the success or failure of the talks.

"We don't use the term anymore because we're going into a friendly negotiation," Trump said. "Perhaps after that negotiation, I will be using it again. You'll know how well we do in the negotiation. If you hear me saying, 'We're going to use maximum pressure,' you'll know the negotiation did not do well, frankly."

At another point, he said it was "absolutely" possible he and Kim could sign a declaration to end the Korean War. The 1950-53 conflict ended with an armistice but not a formal peace treaty.

Pompeo said he was confident the president would be fully prepared and dismissed reports of division inside Trump's foreign policy team over the decision to embrace the meeting with Kim.

In his previous role as CIA director, Pompeo told reporters Thursday, "there were few days that I left the Oval Office, after having briefed the president, that we didn't talk about North Korea."

Pompeo said Kim had "personally" given him assurances that he was willing to pursue denuclearization and said U.S. and North Korean negotiating teams had made unspecified progress toward bridging the gap over defining that term as part of a potential agreement. He would not say whether Trump would insist that the North put an end to its chemical, biological and ballistic missile programs.

Pompeo said Trump's approach is "fundamentally different" from prior administrations. "In the past, there'd been months and months of detailed negotiations and they got nowhere," he said. "This has already driven us to a place we'd not been able to achieve."

Since taking office, Trump has repeatedly accused his predecessors of failing to address the nuclear threat from a nation that launched its atomic program in the 1960s and began producing bomb fuel in the early 1990s. Past administrations have also used a combination of sanctions and diplomacy to seek denuclearization, but the results failed to endure.

Now the president is attempting to work out the North Korean problem in what might seem a radical new way, but which nonetheless has gotten Pyongyang to the table.