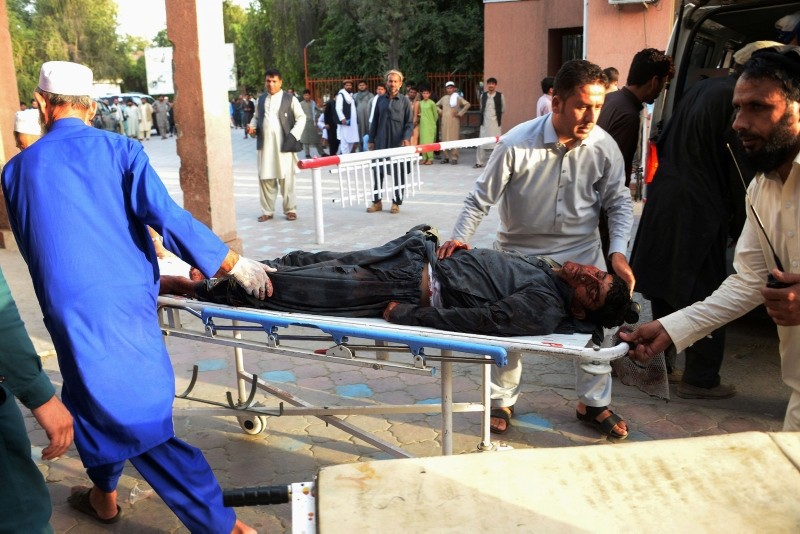 Afghan volunteers carry an injured man on a stretcher to an hospital following a suicide bomber blew himself in Jalalabad on June 16, 2018. (AFP Photo)
by Daily Sabah with Agencies Jun 16, 2018 12:00 am

The death toll from a suicide bombing claimed by Daesh against a gathering of Taliban fighters, Afghan government forces and civilians celebrating a holiday cease-fire has risen to 36, an official said Sunday.

Najibullah Kamawal, director of the health department in the eastern Nangarhar province, said another 65 people were wounded in Saturday's attack.

The bomber targeted a gathering of fighters and civilians who were celebrating a three-day truce coinciding with the Eid al-Fitr holiday. The attack was later claimed by Daesh terror group, which was not included in the cease-fire and has clashed with the Taliban in the past.

Victims included Taliban fighters, security forces and civilians, a spokesman for the governor of Nangarhar province and a provincial council member had said on Saturday.

The attack came as President Ashraf Ghani announced an extension of the government's week-long ceasefire with the militant group after both sides agreed to halt hostilities for Eid.

Ghani made his announcement in a rare televised address to the nation, in which he also asked the Taliban to extend their three-day ceasefire which is due to end Sunday.

"I order the security forces to remain on their defensive positions," Ghani said, adding details of the extension would be released later.

The government's ceasefire, which was due to end Tuesday, did not include Daesh.

On the first two days of Eid, Taliban fighters, Afghan security forces and civilians hugged and took selfies with each other across the country, in an outpouring of emotion over the ceasefire.

Afghan forces manning checkpoints offered Eid greetings to the fighters, embracing and posing for photos with the same people they are usually trying to kill -- a scene that would have been unthinkable only a few days ago.

Villagers also flocked around the insurgents, hugging them and happily taking selfies with the heavily armed fighters as they celebrated the Muslim holiday capping the holy month of Ramadan.

"I am here to offer greetings to our brothers in the police and army," Taliban commander Baba told AFP.

"We have held the ceasefire well so far. Everyone is tired of war and if our leaders order us to continue the ceasefire, we will hold it forever."

The Taliban announced a ceasefire for the first three days of Eid, which started Friday, promising not to attack Afghan security forces for the first time since the 2001 U.S. invasion.

They said they would continue attacking U.S.-led NATO troops.

That came after Ghani announced that police and troops would cease operations against the Taliban for eight days, starting last Tuesday -- though he warned that operations against other militants, including Daesh, would continue.

Bati Kot is on the highway connecting the Nangarhar provincial capital of Jalalabad with Torkham, one of the major border crossings into Pakistan, which has long been accused of supporting the Taliban and providing safe haven to its leaders, charges it denies.

Afghans shared photos on social media purportedly showing Taliban fighters around the country gathering with security forces and locals for the holiday.

The bizarre images served as powerful propaganda for both sides and have fanned hopes among war-weary Afghans for the ceasefire to continue.

"Look, they are brothers. If their leaders come, sit and talk just like their soldiers we will have peace tomorrow," Said Hasibullah posted on Facebook under a photo purportedly showing a Taliban fighter and Afghan soldier having a cup of tea together.

The Taliban had "exploited" the opportunity to show their popularity among ordinary Afghans, a Western diplomat in Kabul told AFP.

"(That's) no bad thing if they are able to see the benefits of talking not fighting," he said.

The unusual bonhomie between the two sides came as Ghani confirmed that Pakistani Taliban chief Maulana Fazlullah had been killed in a U.S. drone strike.

U.S. forces targeted Fazlullah in a counter-terrorism strike on Thursday in eastern Kunar province, close to the border between Afghanistan and Pakistan, U.S. officials said, without confirming his death.

Ghani said Pakistani leaders had assured him the strike was a "great step toward building trust between the two nations," while urging them to "bring (the) Afghan Taliban residing in Pakistan to the negotiation table."