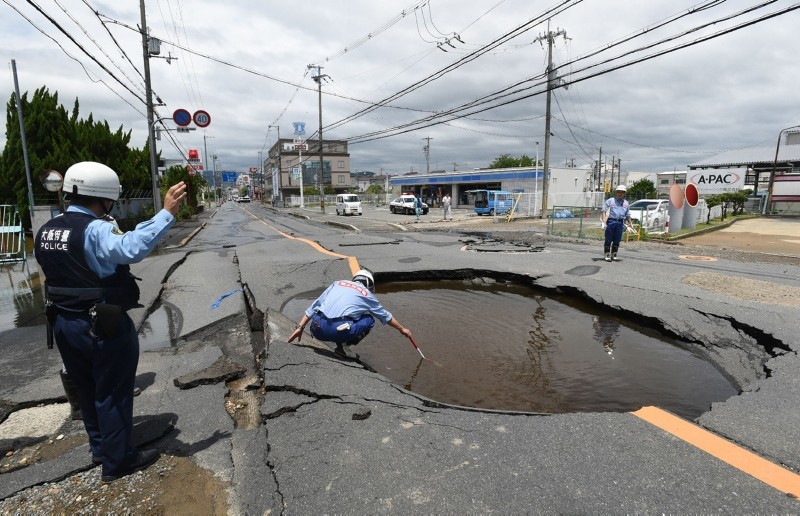 A strong earthquake knocked over walls and set off scattered fires around metropolitan Osaka in western Japan on Monday morning, killing at least three people.

The Fire and Disaster Management Agency said 214 others have been treated at hospitals in five prefectures. Most of the injured were in Osaka, which did not give details, but the injuries reported in Kyoto and three other neighboring prefectures were all minor.

One victim was a 9-year-old girl knocked down by a concrete wall at her elementary school as she walked by. A man in his 80s died in the collapse of a concrete wall in Osaka city. An 84-year-old man in nearby Ibaraki died after a bookshelf fell on top of him at home, according to city officials. Many homes and buildings, including a major hospital, were temporarily without power, though electricity was restored at most places by midafternoon.

The magnitude 6.1 earthquake struck shortly after 8 a.m. north of Osaka at a depth of about 13 kilometers (8 miles), the Japan Meteorological Agency said. The strongest shaking was north of Osaka, but the quake rattled large parts of western Japan, including Kyoto, the agency said.

The morning commute was disrupted, as dozens of domestic flights in and out of Osaka were grounded, while train and subway service in the Osaka area including the bullet train were suspended to check for damage. Passengers were seen exiting trains on the tracks between stations. Some subway services started to resume in the afternoon.

The earthquake reminded many in Japan of the magnitude 7.3 Hanshin-Kobe quake in 1995 that killed more than 6,000 in the region. Monday's quake also followed a series of smaller quakes near Tokyo in recent weeks.

A 30-year-old lawyer Jun Kawasaki said the quake reminded him of the Kobe quake 23 years ago, and started packing up immediately to run away.

"It was not as bad as the Kobe quake," he told the Associated Press from Osaka. His girlfriend ducked down under the table. Elevators in his office building were out of operation. "I used the stairs but I was out of breath by the time I arrived at my office on the 20th floor."