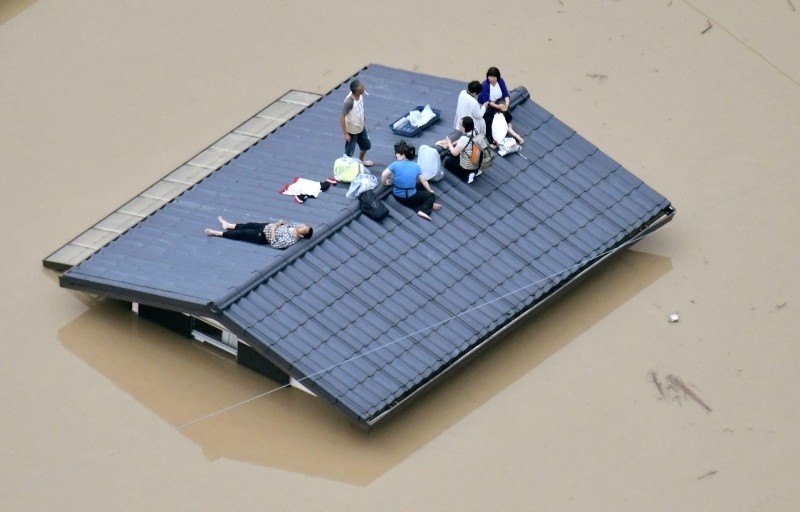 Television footage showed a residential area in Okayama prefecture seeped in brown water spreading like a huge lake. Some people fled to rooftops and balconies and waved furiously at hovering rescue helicopters.

A seasonal rain front dumped record rain over a large area of western Japan, triggering landslides and flooding that hit homes and swept away cars, while authorities urged millions of residents to evacuate their homes.

Okayama prefecture said a man caught in a landslide died, and six others were missing. Evacuation orders had been issued to more than 360,000 people, the prefecture said in a statement.

At least 21 people were confirmed dead in the western prefecture of Hiroshima, one of the hardest-hit areas, while 12 were killed in Ehime on the south-western island of Shikoku, NHK said.

Throughout the affected areas, parked cars sat in pools of water. NHK TV said water had reached as high as 5 meters (16 feet) in the worst-hit areas.

Kyodo news service, which put the death tally at 34 people, said one death was in a landslide in Hiroshima, which had set off a fire, while the body of a child was found in another area. NHK said a woman died in her home in Hiroshima when it got buried in a mudslide.

Assessing overall casualties was a challenge because of the widespread damage. NHK repeatedly urged those awaiting rescue to not lose hope.

In Ehime prefecture, a woman was found dead on the second floor of a home hit by a landslide, Kyodo said. Also in Ehime, two elementary-school girls and their mother who got sucked into a mudslide were rescued but their hearts weren't beating, it said.

Kyoto prefecture said it was working to control flooding at several dams and identified one fatality as a 52-year-old woman.

Evacuation orders or advisories were sent for 4.72 million people, and 48,000 members of the Self-Defense Forces, police and firefighters were mobilized for search missions, according to Kyodo.

The Japan Meteorological Agency upgraded its alert system to the highest level -- only issued when the amount of rain is expected to be the highest in decades -- in large areas of western Japan, while lifting the warning in other regions.