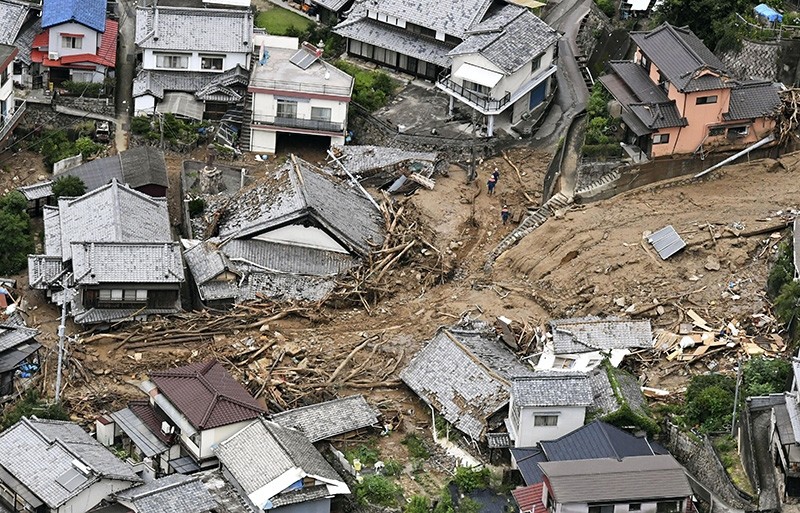 Searches continued Sunday night for victims of heavy rainfall that hammered southern Japan for the third straight day, as the government put the death toll at 48, with 28 others presumed dead.

Japanese government spokesman Yoshihide Suga said the whereabouts of 92 other people were unknown, mostly in the southern area of Hiroshima prefecture. More than 100 reports of casualties had been received, such as cars being swept away, he said. Some 40 helicopters were out on rescue missions.

"Rescue efforts are a battle with time," Prime Minister Shinzo Abe told reporters. "The rescue teams are doing their utmost."

Turkey's Foreign Minister on Sunday extended condolences to the families of the victims of the floods and landslides in Japan.

"My heartfelt condolences to the Japanese government and the families of the victims of the floods in Hiroshima prefecture that killed at least 60 people. I wish speedy recovery to those injured," Mevlüt Çavuşoğlu said in a Twitter message.

The Japan Meteorological Agency said three hours of rainfall in one area in Kochi prefecture reached an accumulated 26.3 centimeters (10.4 inches), the highest since such records started in 1976.

The assessment of casualties has been difficult because of the widespread area affected by the rainfall, flooding and landslides. Authorities warned that landslides could strike even after rain subsides as the calamity shaped up to be potentially the worst in decades.

In Hiroshima prefecture, a woman who was reported as missing after getting trapped in her car was found but was pronounced dead, Kyodo news service reported. In another area in Hiroshima, 12 people went missing when a residential area got sucked into a landslide, and one body was later found.

Kochi prefecture, on Shikoku, issued landslide warnings almost over the entire island. Public broadcaster NHK TV showed overturned cars on roads covered with mud. A convenience store worker, who had fled to a nearby rooftop, said water had reached as high as his head.

The Japanese government set up an emergency office, designed for crises such as major earthquakes. Military paddle boats were also being used to take people to dry land.

Okayama prefecture said in a statement that four people had died, eight others were missing and 11 were injured, at least one of them seriously. Seven homes were destroyed, dozens more were damaged, while more than 570 were flooded.

Kyodo reported several deaths in a landslide in Hiroshima and more bodies were retrieved from collapsed housing in the ancient capital of Kyoto, both areas where the rainfall was heavy in the past few days.

Throughout the hard-hit areas, rivers swelled and parked cars sat in pools of water. Japan has sent troops, firefighters, police and other disaster relief. People have also taken to social media to plead for help.