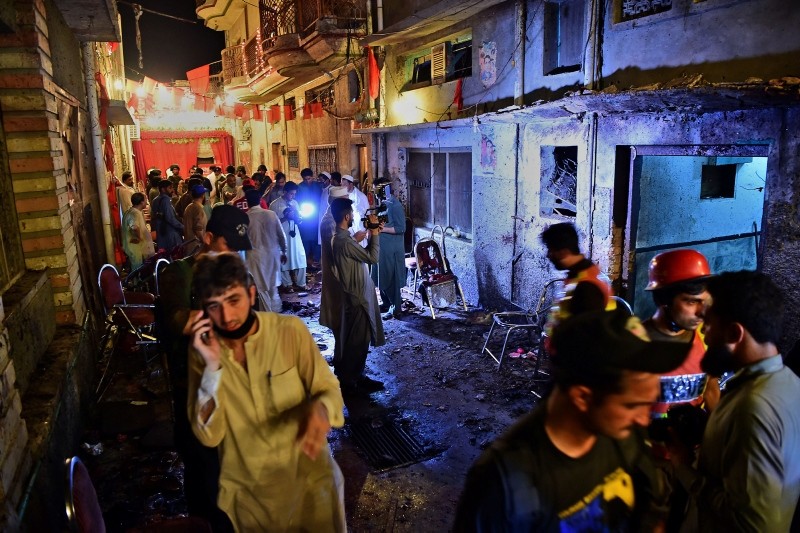 Pakistani security officials and volunteers search the site after a suicide bombing at an election rally in Peshawar on July 10, 2018. (AFP Photo)
by Compiled from Wire Services
Jul 10, 2018 12:00 am

The death toll in a suicide bombing at an election rally in northwestern Pakistan rose to 20 Wednesday as Taliban militants claimed responsibility, officials said, in the first major attack ahead of July 25 polls.

According to the police, the accident took place in Yakatoot in the city of Peshawar, where the Awami National Party (ANP), a local nationalist party, was holding a rally.

A local leader of the Awami National Party (ANP), Haroon Bilour, was among those killed in the attack in the city of Peshawar late Tuesday, officials have confirmed.

The party has been targeted by militants in the past over its vocal opposition to extremist groups like the Taliban.

The bombing came hours after the Pakistan military spokesman said there were security threats ahead of national elections.

"The death toll has risen to 20 and 63 others were wounded, out of whom 35 are still admitted in two Peshawar hospitals," Peshawar police chief Qazi Jameel told AFP.

Bomb disposal chief Shafqat Malik told AFP that the suicide bomber -- who he said was around 16 years old -- had eight kilograms of explosives and three kilograms of pellets, ball bearings and other shrapnel on his body.

Peshawar lawyers went on strike on Wednesday to protest and mourn the death of Haroon, who was also a barrister. Local traders also announced a strike and mourners thronged to Bilour's residence to offer condolences.

Bilour was one of the ANP's election candidates and belonged to an influential political family in the Khyber-Pakhtunkhwa province, of which Peshawar is the capital.

His father Bashir Bilour, one of the ANP's top leaders, was also killed by a suicide bomber in 2012.

Police said the bomber struck when Bilour was about to address some 200 supporters.

Mohammad Khorasani, spokesman for the Tehreek-e-Taliban Pakistan militant group, claimed the responsibility for the attack.

"Tehreek-e-Taliban Pakistan's mujahid (holy fighter) Abdul Karim last night carried out a suicide attack on important ANP leader Haroon Bilour in which he has been killed," Khorasani said in a statement.

He said the militants "have already declared a war" on the ANP and called on the public to keep away from them, "or you will be responsible for your own loss".

The ANP governed the Khyber Pakhtunkhwa province, of which Peshawar is the capital, from 2008 to 2013. The military waged a major offensive against militants in the Swat Valley in 2009. Extremists killed hundreds of ANP leaders and supporters in attacks around the 2013 election.

Bilour's father, Bashir Ahmed Bilour, was killed by a suicide bomber during a meeting in 2012 ahead of the election.

Peshawar borders the Khyber district, once a stronghold of Pakistani militants. The area was cleared after military operation last July, and Pakistan's army says hundreds of militants fled to border areas of Afghanistan.

Pakistani authorities claimed that those who fled from Pakistani tribal areas established hideouts in Afghanistan's Kunar, Noristan and Nangrahar provinces, from where they carry out attacks in Pakistan.