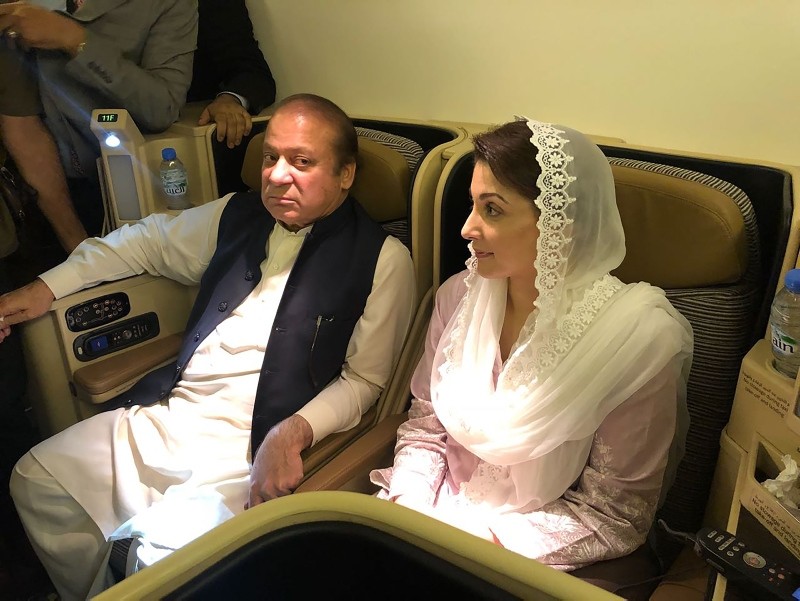 Former Pakistan premier Nawaz Sharif was arrested on his return to the country late Friday, where he faces 10 years in prison for corruption, ahead of already tense elections his party claims are being rigged.

Sharif and his daughter Maryam "have been arrested" by corruption authorities "with immediate effect and till further orders", according to a statement from the Islamabad city administration. They landed in Lahore and were then taken to the capital, the statement said.

An anti-corruption official confirmed the arrests to AFP on condition of anonymity.

Sharif, who claims he is being targeted by the country's powerful security establishment, is fighting for his political life as his Pakistan Muslim League-Nawaz (PML-N) party limps into the final weeks of campaigning ahead of nationwide polls on July 25.

Some 15,000 singing and dancing supporters lined the Mall, Lahore's main thoroughfare, ahead of Sharif's return from London, an AFP reporter there said.

Lahore is the capital of Punjab province, Pakistan's most populous and a PML-N stronghold.

A smaller contingent of around two dozen supporters waited on the road to Adiala prison in Rawalpindi, the garrison city neighboring Islamabad, where Sharif was expected to be taken before going to a guest house on the outskirts of the capital which authorities said had been declared a "sub-jail."

Roughly 100 police officers had blocked the road to the jail with freight containers, an AFP reporter said.

Analysts have said Sharif's return -- one week after he was sentenced in absentia to 10 years in prison by a corruption court over the purchase of high-end properties in London -- could help lift his party's fortunes ahead of the vote.

"I know that... I will be directly taken to jail," Sharif, who was ousted for corruption by the Supreme Court last year and later also banned from politics for life, said in a video released by his party earlier Friday.

He asked Pakistanis to "walk with me, join hands with me and change the destination of the country."

On Thursday, Sharif's brother Shahbaz, who is leading the PML-N's election campaign, said hundreds of the party's workers and supporters had been arrested in what he described as "naked" pre-poll rigging.

As the political drama unfolded, fears of violence also surged ahead of the polls after a suicide bomber targeting a political rally in southwestern Balochistan province killed candidate Siraj Raisani and 127 other people in one of the deadliest attacks in Pakistan's history.

The blast -- claimed by the Daesh terrorist group -- ripped through a crowd in the town of Mastung.

Raisani was running for the election on the newly launched Baluchistan Awami Party ticket.

Earlier, four people were killed by a bomb targeting another politician's convoy in the country's northwest. There has been no claim of responsibility.

On Tuesday, a bomb attack claimed by the Pakistani Taliban targeted a political rally in the city of Peshawar, killing 22 people.

The string of attacks underscored the fragility of Pakistan's security, which has improved dramatically in recent years, though analysts warn that politicians and the security establishment have not yet tackled the root causes of extremism.

The military has already warned of security threats and said it will deploy more than 370,000 soldiers on polling day.

Pakistan's military remains its most powerful institution, and has faced blistering allegations that it is pressuring the media and politicians in a bid to manipulate the polls against the PML-N.

It denies the accusations.

The election will pit the PML-N against its main rival, the Pakistan Tehreek-e-Insaf, a party led by cricket star-turned-politician Imran Khan.

Since Sharif returned to London last month, where his wife is being treated for cancer, the PML-N has fallen into disarray and failed to mount an organized campaign to rally the base ahead of the polls.

Recent polling showed the PTI's popularity steadily rising and closing the gap with the PML-N.

Analyst Zahid Hussain said the ex-leader was "fighting back for his political life".

"Certainly it would have been worse for the party's prospects had he not come," Hussain added.

Sharif was the 15th prime minister in Pakistan's 70-year history -- roughly half of it under military rule -- to be removed before completing a full term.

He has faced -- and fought off -- similar challenges in the past.

In 1993, he was sacked from his first term as premier for corruption. His second term was ended by a coup in 1999, and he was imprisoned by the military regime while he faced trial for multiple charges, including corruption.

"In Pakistan, leaders have to go to jail, that's important for their profile," said Pakistani journalist Rahimullah Yusufzai.

Sharif was later allowed by the military regime to go into exile in Saudi Arabia, returning in 2007 before becoming prime minister for a third time in 2013.