Pakistanis mourning victims of Daesh terror attack ahead of elections 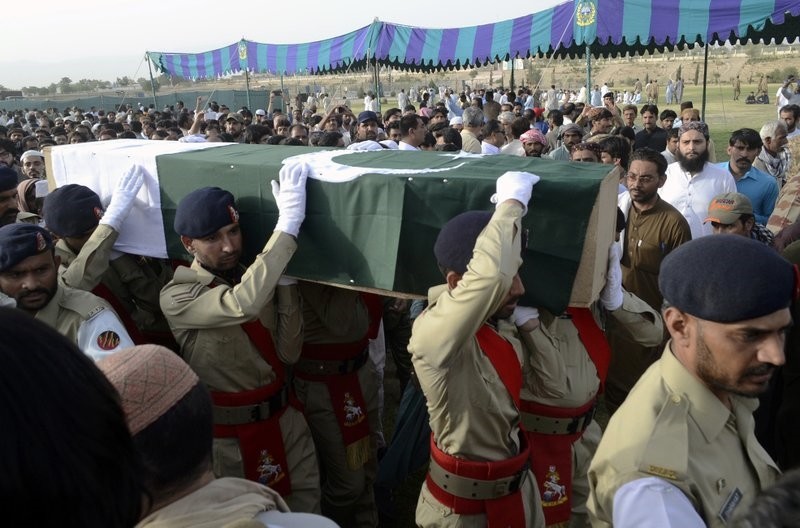 Pakistani troops carry the casket, wrapped in national flag, of provincial candidate Siraj Raisani, who was killed in the Fridayu2019s suicide bombing in Mastung, during a funeral prayer in Quetta, Pakistan, Saturday, July 14, 2018. (AP Photo)
by Associated Press Jul 15, 2018 12:00 am

Pakistanis observed a day of mourning on Sunday for the victims of the horrific weekend attacks perpetrated by Daesh terrorist group that killed 153 people, including a provincial assembly candidate during an election rally in southwestern Baluchistan province.

The deadly terror attacks occurred just hours before Pakistan's former prime minister Nawaz Sharif returned to Pakistan from London to face a 10-year jail sentence for corruption charges. He and his daughter Maryam, who was sentenced to seven years, were taken to jail upon their return. They are expected to appeal their conviction on Monday.

On Sunday Sharif released an audio message from his prison cell bemoaning his arrest and urging his supporters to rally voters to his Pakistan Muslim League party ahead of general elections on July 25. Sharif's brother, Shahbaz, has taken over the leadership of the party and is shepherding it through the election campaign.

"Spread my message all over the country," he urged his party workers in his brief message.

Meanwhile, black flags of mourning were hoisted at the Baluchistan Awami Party's offices in the Baluchistan provincial capital of Quetta and residents displayed banners denouncing the massacre.

Caretaker Prime Minister Nasirul Mulk visited the provincial capital of Quetta Sunday to express condolences to Raisani's family and others.

So far more than 150 people have died in terror attacks, underscoring the security threat ahead of the July 25 vote.