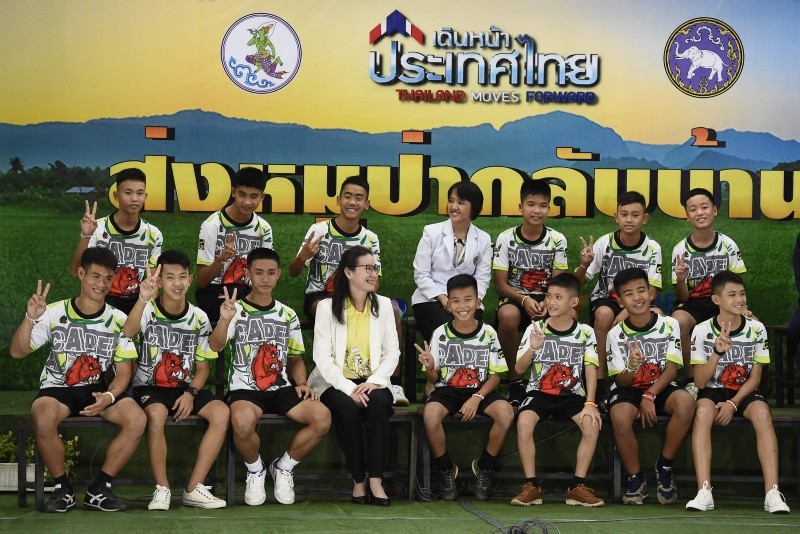 12 Thai boys and their football coach, rescued from a flooded cave after being trapped, attend a press conference in Chiang Rai on July 18, 2018, following their discharge from the hospital. (AFP Photo)
by Daily Sabah with AP
Jul 18, 2018 12:00 am

The 12 boys and their soccer coach who were rescued from a cave in northern Thailand made their first media appearance on Wednesday, entering to applause from reporters and classmates.

The group, looking healthy after recuperating at a hospital, put on a quick demonstration of their ball-handling skills on a miniature soccer field set up in the hall where they met journalists from around the world.

They then hugged their friends before taking seats up front with doctors and others who helped them during their ordeal.

The boys recounted the stunning moment when two British divers found them. Trapped in the recesses of a flooded cave, the 12 boys and their soccer coach were trying to dig their way out when they heard voices in the darkness. Their coach quickly told everyone to be quiet.

"We weren't sure if it was for real," said 14-year-old Adul Samon. "So we stopped and listened. And it turned out to be true. I was shocked."

The boys, whose ages range from 11 to 16, and their 25-year-old coach answered questions submitted by the media, including about the lessons they learned during their experience.

Adul said, "This experience teaches me not to live life carelessly."

"I want to be a navy SEAL because I want to help others," said one.

All said they want to apologize to their parents, most of whom they had not informed in advance about the trek to the cave after soccer practice.

"I know my mom is going to punish me and I am in big trouble with my mother," one of the boys said when asked what he expected to happen when he got home.

Doctors said the 13 were healthy in body and mind. They said the boys gained around 3 kilograms (6.6 pounds) on average since they were rescued from the cave. They were said to have lost an average of 4 kilograms (9 pounds) during the more than two weeks they were trapped in the cave.

The news conference was the first opportunity the members of the team had to speak directly to the media, though video of them in the hospital was released previously. Officials reviewed questions in advance to make certain none might cause damaging psychological effects.

The Wild Boars teammates had entered the Tham Luang cave on June 23 for what was to be a quick, relaxing excursion after soccer practice. But rain began falling while they were underground, and water filled the caverns, cutting off their escape.

The British divers found the group huddling on a spot of dry ground deep inside the cave on July 2, hungry but generally healthy. An international team of rescuers using diving equipment and pulleys extracted the 12 boys and their coach through the tight, flooded passageways in three separate missions last week.

Some of the boys were treated for minor infections during their hospital stay, but all 13 have been described as recovering well.

Banphot Konkum, an uncle who has raised Duangpetch, was teary-eyed as he hugged his nephew.

Earlier Wednesday, Banphot said he would have a renovated bedroom and gifts awaiting him.