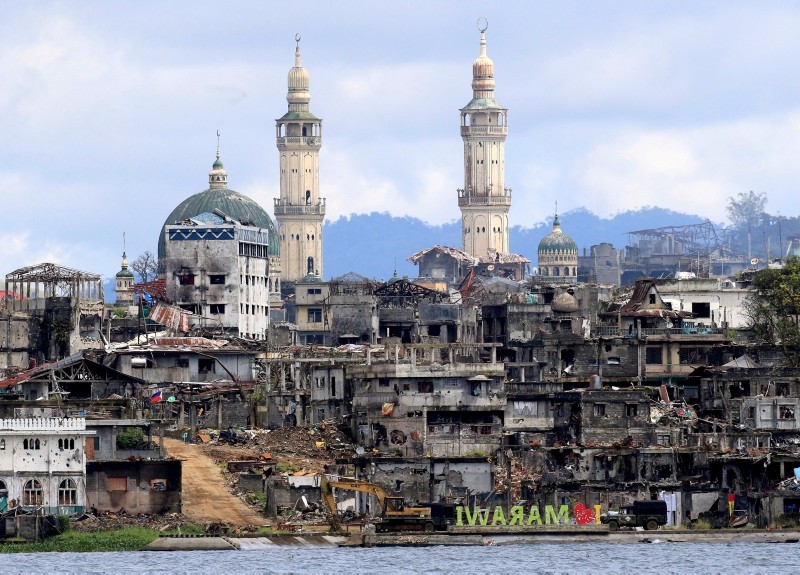 This Oct. 26, 2017 file photo shows a signage of ,I love Marawi, in front of damaged houses, buildings and a mosque inside a war-torn Marawi city, southern Philippines. (Reuters Photo)
by Compiled from Wire Services
Jul 27, 2018 12:00 am

Philippine President Rodrigo Duterte has signed legislation creating a new Muslim autonomous region aimed at settling nearly half a century of unrest in the south.

Presidential spokesman Harry Roque and another key aide, Bong Go, told reporters without elaborating late Thursday that Duterte signed the bill creating the region, to be called Bangsamoro. The autonomy deal, which has been negotiated for more than two decades under four presidents, was ratified earlier this week by both chambers of Congress.

"This is to announce that the president has just signed the BOL into law," Roque said in a cellphone message, referring to the Bangsamoro organic law.

Duterte signed the Organic Law for the Bangsamoro Autonomous Region in Muslim Mindanao, fulfilling a promise he made during his third State of the Nation Address.

"The BBL has been signed," Duterte said during an event in Zamboanga Sibugay province.

"But I'm still going back because I have a ceremony with Jaafar and Murad," he added.

The president also said he would like to talk to Moro National Liberation Front (MNLF) founding chairman Nur Misuari to forge a peace deal which could be realized by the end of the year.

"Nur, if you are my brother and if you are listening, let us talk because we are old. Fighting is no longer an option for you and me," he said.

MILF's Jaafar earlier this week expressed optimism that his group and the MNLF can work together to establish the proposed Bangsamoro government.

The measure, which aims to grant wider autonomy for the Bangsamoro-a collective term for Filipino Muslims — would replace the existing ARMM with the Bangsamoro Autonomous Region-a region with more political and fiscal powers, including a bigger annual block grant equivalent to five percent of the total national internal revenue collection.