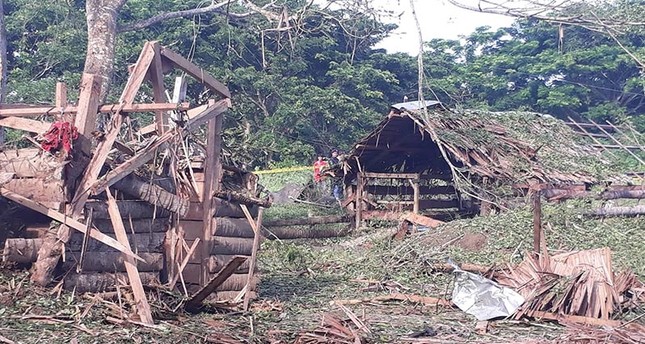 Ten people, including troops and civilians, were killed when an explosion tore through a van at an army checkpoint in the southern Philippines Tuesday, as authorities warned the blast could be linked to a wider plot by a militant group.

The powerful explosion happened after soldiers and pro-government militia troops stopped the vehicle and tried to search it just after dawn on the outskirts of the mainly Christian city of Lamitan, which is on the predominantly Muslim island of Basilan.

One soldier, five militia troops and four civilians were killed.

He added that government forces had been on heightened alert after receiving reports that extremists planned to plant improvised explosives in areas around the island.

"We can just imagine the tragedy that this would bring to the people of Basilan had we not stopped them at the checkpoint," he said.

Basilan is a stronghold of the notorious Abu Sayyaf kidnap-for-ransom group.

It is one of several armed groups fighting government forces in the southern Philippines, where a decadeslong rebellion has claimed more than 100,000 lives by government count.

Roderick Furigay, the Lamitan vice mayor, speculated that the explosives could have been intended for a parade on Tuesday morning by 4,000 children in the center of the town to mark the country's "nutrition month."

"That could have been (the target)," he said on ABS-CBN television. "It's a good thing they were stopped at the checkpoint."

President Rodrigo Duterte recently signed a law to create greater autonomy in the south which is hoped to help end the conflict.

Duterte put the southern Philippines including Basilan under martial rule until the end of this year after Abu Sayyaf members based on the island joined pro-Daesh terror group militants who seized the southern city of Marawi last year.

The five-month siege killed 1,200 people and destroyed much of the center of the city, which Duterte said the militants planned to turn into the capital of a southeast Asian caliphate.

"We condemn in the strongest possible terms the latest terrorist attack in Basilan perpetrated in violation of our laws," Roque said in a statement.