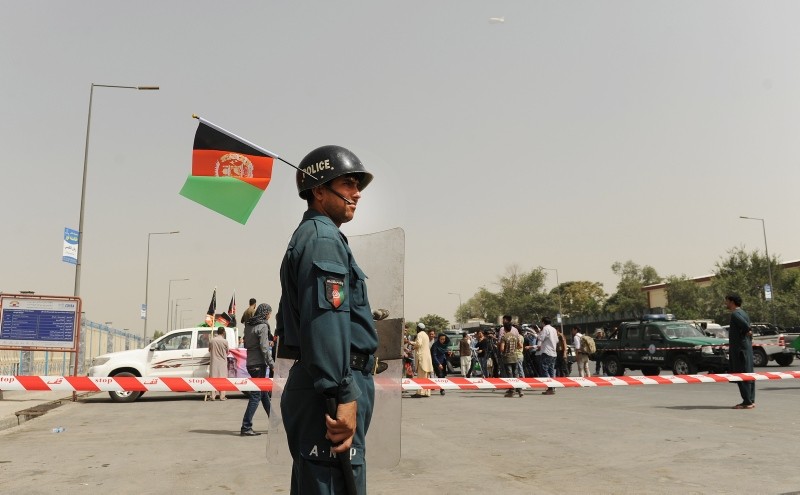 An Afghan police officer stands guard during a gathering of civil society activists urging the government to secure Ghazni province in downtown Kabul, Afghanistan, 13 August 2018. (EPA Photo)
by Aug 19, 2018 12:00 am

Afghan President Ashraf Ghani declared a provisional three-month ceasefire with the Taliban in a televised broadcast Sunday, but said the truce would hold only if the insurgents reciprocated.

The announcement followed a bloody week of fighting across Afghanistan which saw the Taliban launch a massive assault against the provincial capital Ghazni -- just a two-hour drive from Kabul.

Anticipation had been mounting ahead of Ghani's speech following mixed signals from the presidential palace over whether the government would offer a fresh ceasefire, following a brief truce earlier this year.

"I once again announce a ceasefire from tomorrow until the prophet's birthday provided that the Taliban reciprocate," said Ghani, referring to the Prophet Mohammed's birthday which Afghanistan celebrates on November 21.

The president's announcement was immediately welcomed in neighboring Pakistan, which has long been accused of fostering links with the Taliban's leadership and providing sanctuary to its fighters.

An earlier, three-day ceasefire over the Eid holiday in June -- the first formal, nationwide ceasefire in the country since the 2001 US invasion -- saw thousands of insurgents pour into cities across Afghanistan, eating ice cream and posing for selfies with security forces.

It spurred hopes that a new path was opening for possible peace talks in the country to the end the nearly 17-year-old war, but violence has surged in the weeks since.

That battle coincided with attacks on government installations across the country.