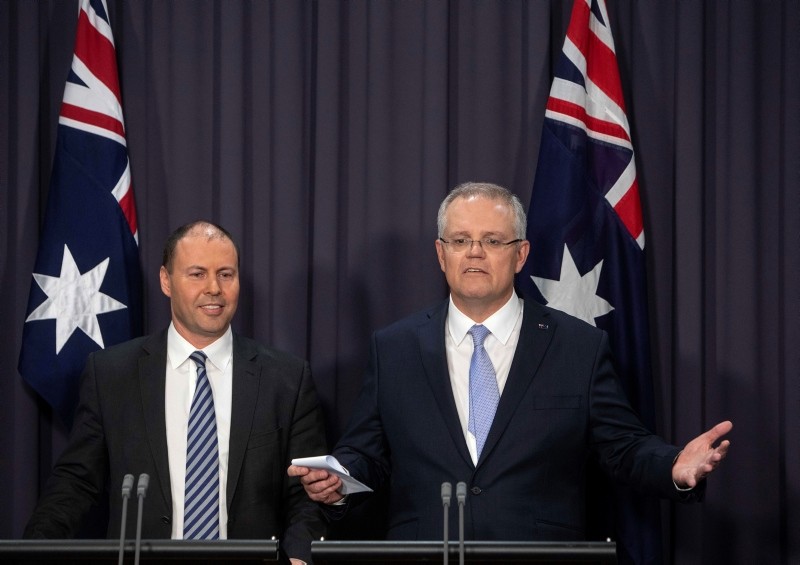 Australia's next Prime Minister Scott Morrison (R) gestures while speaking with Deputy Leader of the Liberal Party Josh Frydenberg during their first press conference at Parliament House in Canberra, Friday, Aug. 24, 2018. (AP Photo)
by Aug 24, 2018 12:00 am

Scott Morrison was installed as Australia's seventh prime minister in 11 years Friday after a stunning party revolt against Malcolm Turnbull, which the new leader admitted had left the government "bruised and battered."

"You are now the 30th prime minister of the Commonwealth of Australia," Governor-General Peter Cosgrove told Morrison after he took the oath of office.

Morrison's party deputy, Josh Frydenberg, was sworn in as the treasurer.

Former home affairs minister Peter Dutton, an ex-police officer and right-winger, was the driving force behind the move to oust Turnbull after a Liberal Party backlash against his more moderate policies.

But after a torrid week of political maneuvering in Canberra it was Morrison, a Turnbull ally who served as treasurer, who won a party vote 45-40.

Morrison -- an evangelical Christian known as "ScoMo" -- replaced a man who became the latest in a long line of leaders knifed in the back by ambitious colleagues.

Morrison admitted the extraordinary scenes in the nation's capital had taken a heavy toll on parliament and the Liberal Party.

He said his top priority was to help farmers in New South Wales struggling through one of the worst droughts in half a century.

"This is our most urgent and pressing need right now," Morrison said.

Dutton, who Turnbull accused of bullying and intimidation in the move to knife him, pledged to provide "absolute loyalty" to Morrison.

Turnbull, who pledged to quit parliament after his near three-year reign came to an end, survived one attempt to oust him on Tuesday, but ministers then began defecting, throwing the government into crisis.

His departure from politics will spark a by-election for his Sydney seat, threatening the government's wafer-thin one-seat parliamentary majority.

He used his final press conference to lash out at the "wreckers" in his party.

"There was a determined insurgency from a number of people both in the party room and backed by voices, powerful voices, in the media," he told reporters, in reference to media mogul Rupert Murdoch's conservative News Corporation.

"It was described as madness by many, and... in so far as there has been chaos this week, it has been created by the wreckers."

Dutton, who favors slashing migrant numbers and even pulling Australia out of the Paris climate agreement, was the sole candidate to be prime minister until Thursday when Morrison entered the fray to try to halt his power grab.

Former Prime Minister Tony Abbott, an arch conservative widely seen as the instigator of the move to get rid of Turnbull, said it was now important to "save the government" with national elections due by the middle of next year.

Morrison, a former immigration minister, who took credit for "stop the boats" -- a harsh policy to halt asylum-seekers from entering Australia -- is further to the right than Turnbull but not as hardline as some in the party.

Politics expert Rob Manwaring of Flinders University said Morrison was likely to continue Turnbull's economic agenda, of which he was one of the main architects as treasurer.

But he could shift the government's environment policy to the right as a consistent voter against the introduction of a carbon price.

"In one sense I think there would be continuity (in the economic portfolio), in another sense, (he'll be) trying to downgrade or shift any radical action on climate policy," he told AFP.

The unrest is the latest chapter in a turbulent decade for Australian politics, which has frequently descended into squabbling that has alienated voters.

No leader has managed to serve out a full term since former Prime Minister John Howard lost the 2007 election, in a remarkable revolving door at Canberra's parliament house.

One minister was so disillusioned with the push to oust Turnbull that he took to Twitter to apologize to the Australian people.

"Australia. We owe you an apology. I'm sorry. You deserve better than many of the things our Federal Parliament has served up to you for the past 10 years," wrote Nationals MP Darren Chester, whose party is in coalition with the Liberals.

The 50-year-old Morrison's stealth candidacy reflected aspirations he has had since he entered parliament in 2007, representing the Sydney seat of Cook -- the site of Australia's last race riots in 2005.

"I look forward to it. I relish it," he said after rising to the country's highest political role.

He built his reputation in the party as a tough but effective operator when he took on the immigration portfolio from 2013-14, implementing the controversial "Operation Sovereign Borders" to stop asylum-seekers arriving in Australia by boat.

They were either sent back to where they had come from or transferred to remote Pacific island camps, a policy roundly criticized by the United Nations and rights groups.

A defiant Morrison stared down his critics and enforced a veil of secrecy around the military operations to turn back boats, sometimes to countries with dodgy human rights records.

As doctors and advocates slammed the conditions in the camps on Manus Island in Papua New Guinea and on Nauru, where some asylum-seekers were held for several years, Morrison celebrated the fall in the number of arrivals.

He stressed that the policy had stopped the tide of boats and prevented people from drowning at sea when they undertook the long, treacherous journey to Australia.

Even so, critics questioned how the man in charge reconciled his worn-on-the-sleeve Christian faith with his uncompromising immigration stance.

Greens leader Richard Di Natale, who has pleaded for politicians to consider the plight of asylum-seeker children held on Nauru, said Friday that Morrison's policy had left a "toxic legacy of cruelty to vulnerable people".

Born May 13, 1968 in the beachside Sydney suburb of Bronte, Scott John Morrison was the younger of two sons, whose parents ran church youth programs.

Morrison himself was an active church member, and met his wife Jenny as a young teenager through the church. The pair married when he was 21.

It took 18 years and multiple rounds of IVF before the first of two children was born, and Morrison dedicated his maiden parliamentary speech to his daughter Abbey Rose.

Morrison worked in the tourism sector at home and in New Zealand before being selected to contest the seat of Cook in 2007.

He credited his win to the "most significant influences on my life -- my family and my faith."

After serving as shadow immigration minister, Morrison moved straight into the government job when the Liberal party took power in 2013.

A short stint in the social services portfolio followed, before he took over the treasury when Turnbull became leader in September 2015.

Morrison presided over Australia's economy as the government sought to return the budget to surplus and simultaneously cut personal income and small business taxes.

On social issues, Morrison has stood to the right of the more moderate Turnbull, and opposed the legalization of same-sex marriage last year.

But he has also tried to soften his image, appearing on a cooking-with-politicians series that airs on national broadcaster ABC.