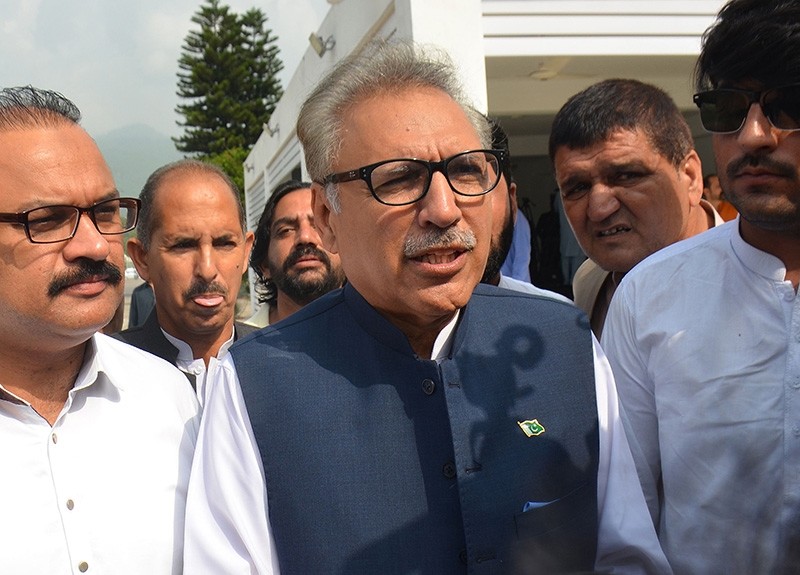 Leader of ruling Pakistan Tehreek-e-Insaf (PTI) party and president candidate Arif Alvi (C) arrives before the president election at the National Assembly in Islamabad on Sept. 4, 2018. (AFP Photo)
by Compiled from Wire Services Sep 04, 2018 12:00 am

Pakistan on Tuesday elected Arif Alvi, backed by the ruling Pakistan Tehreek-e-Insaaf (PTI) party of prime minister Imran Khan, as its 13th president for the next five years.

According to unofficial results, Alvi secured 353 votes out of a possible 679. He is expected to replace Mamnoon Hussain, an ally of former prime minister Nawaz Sharif, who will be completing his five-year term on Sept. 8.

Khan's critics accuse him of having benefited from an underhand intervention by the military in his favor, and from fraud on the day of the vote.

State-run Pakistan television announced the unofficial results just over an hour after the voting ended Tuesday, with Alvi claiming victory in televised remarks. The official result is expected to be announced by the election commission on Wednesday.

Alvi told reporters he was "thankful to God," and vowed to be a president for all of Pakistan. TV footage showed him shaking hands with parliamentarians after the vote, with many handing him sweets in celebration.

Hussain, a close ally of ousted premier Nawaz Sharif, had kept a low profile during his tenure.

Alvi, a father of four and active Twitter user, was shot and wounded during a protest against military dictator Ayub Khan in Lahore in 1969. He still has a bullet embedded in his right arm.

He served as PTI's secretary general for eight years from 2006, and was elected an MP in the southern megacity of Karachi in 2013, winning re-election in the July vote.

Pakistani presidents wielded more power until President Asif Ali Zardari, the husband of assassinated premier Benazir Bhutto, took office in 2008 and devolved most of his powers to his prime minister Yousaf Raza Gilani.

Political analyst Sohail Warraich said the president's role is now to act as a bridge between the federal government and the provinces, adding that Alvi's status as a member of middle-class Pakistan would endear him further to Khan.

Nuclear-armed Pakistan, a Muslim giant of more than 207 million people, has seen security improve dramatically in recent years after a decade-long struggle against terrorism.

But Khan's government now faces major challenges, with the country teetering on the edge of a balance-of-payments crisis that analysts say could force it to seek an IMF bailout.

Pakistan is also among the world's worst affected countries by global warming, and is facing a shortage of water exacerbated by its surging population.