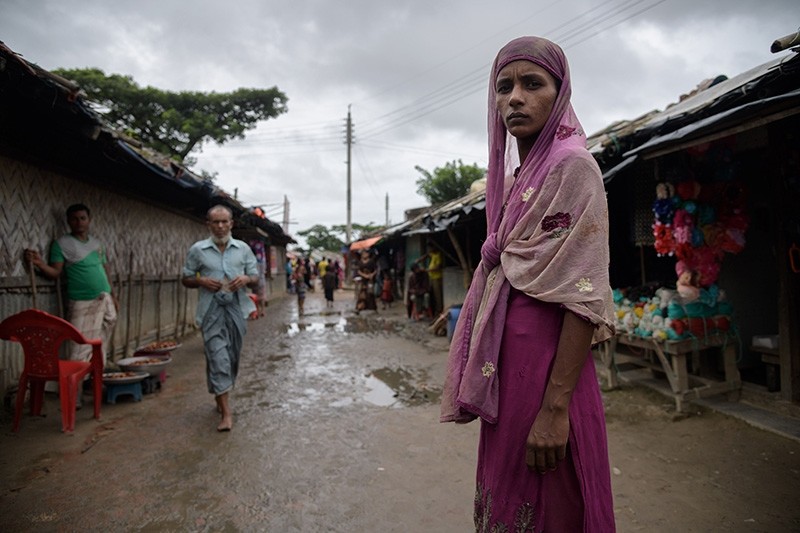 Over 750,000 Rohingya Muslims have fled Myanmar for Bangladesh since August 2017, and an estimated 100,000 remain internally displaced due to systematic violence by the army, whose generals have been accused of war crimes by the United Nations.

These displaced Rohingya have been forced to live under life-threatening conditions in crowded villages, building small homes with bamboo, nylon and wicker.

Sarminya village's supervisor Nurullah Hakim said 964 families there who fled constant persecution from Buddhist nationalists have been poverty-stricken and struggle daily to survive.

"For six years, Myanmar's government authorities have never come here. They have blockaded us. They have restricted us from exiting the blockade at all," he told Anadolu Agency.

"We have no jobs here and we aren't allowed to leave to look for work or build a school where we can send our children. There are no clinics or hospitals where those of us who are sick can seek treatment," Hakim added.

"They don't even give us identity cards. In fact, if we say that we are from 'Rohingya' anywhere, we get arrested," he said.

Hakim also said the river where the residents would previously go fishing to earn a livelihood has been restricted by the government..

"Until last year we used to fish by the river. They don't even allow that anymore," he said.

Hakim said without international aid organizations, especially aid from Turkey, the displaced Rohingya would face extreme challenges to survive. He thanked them "for not forgetting us."

Hakim called on the Islamic community and the rest of the world to work toward peace.

In just a year, since August 2017, nearly 24,000 Rohingya Muslims have been killed by Myanmar's state forces.

The U.N. has documented mass gang rapes, killings -- including of infants and young children -- brutal beatings, and disappearances committed by Myanmar state forces.

U.N. investigators have said such violations may have constituted crimes against humanity.

Myanmar has denied citizenship to Rohingya since 1982 and excludes them from the 135 ethnic groups it officially recognizes, which effectively renders them stateless.

The Rohingya trace their presence in Rakhine back centuries. However, most people in majority-Buddhist Myanmar consider them to be unwanted Muslim immigrants from Bangladesh.