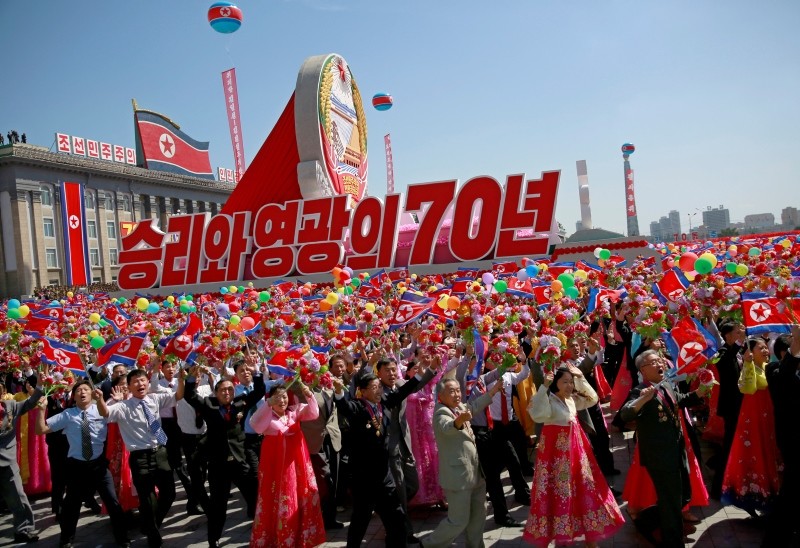 North Korean participants march with a float during a parade celebrating the National Day and 70th anniversary of its Foundation in Pyongyang, North Korea, Sept. 09, 2018. (EPA Photo)
by Compiled from Wire Services Sep 09, 2018 12:00 am

North Korea rolled out some of its latest tanks and marched its best-trained goose-stepping units through Kim Il Sung Square in a major military parade on Sunday to mark its 70th anniversary, but held back its most advanced missiles and devoted nearly half of the event to civilian efforts to build the domestic economy.

Tens of thousands of North Koreans waving brightly colored plastic bouquets filled Pyongyang's Kim Il Sung Square as the parade began. Pyongyang residents have been training for months for the anniversary and held up the bouquets to spell out words and slogans that can be seen from the VIP viewing area.

Kim attended the morning parade but did not address the assembled crowd, which included the head of the Chinese parliament and high-level delegations from countries that have friendly ties with the North. 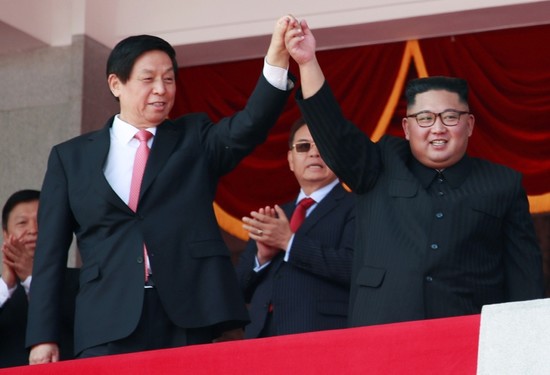 At the end of the two-hour event he strolled to the edge of the balcony with the Chinese special envoy, Li Zhanshu, who is also the third-ranking member in China's ruling Communist Party. The two held up their joined hands to symbolize the countries' traditionally close ties, though the absence of Chinese President Xi Jinping could indicate Beijing still has some reservations about Kim's initiatives.

Diplomatic invitations for the anniversary went out around the world, but the only head of state who attended was Mauritanian president Mohamed Ould Abdel Aziz, although French actor Gerard Depardieu was spotted sitting in a section below the main tribune, according to AFP.

Senior statesman Kim Yong Nam, the head of North Korea's parliament, set the relatively softer tone for the event with an opening speech that emphasized the economic goals of the regime, not its nuclear might. He called on the military to be ready to work to help build the economy.

After a truncated parade featuring tanks and some of its biggest artillery, fewer than the usual number of missiles and lots of goose-stepping units from all branches of the military, the focus switched to civilian groups ranging from nurses to students to construction workers, many with colorful floats beside them. 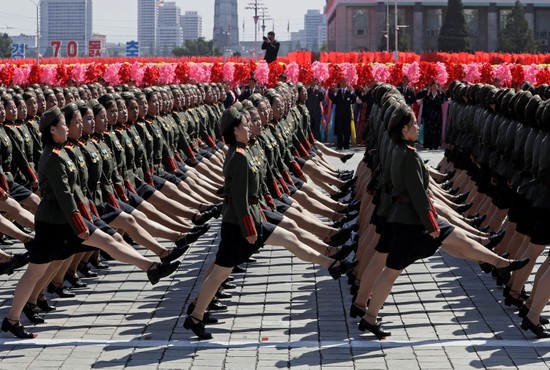 The combining of military and civilian sections is a familiar North Korean parade format.

The past two big anniversaries of North Korea's founding, in 2008 and 2013, did not feature the Korean People's Army, only the civil defense units, which are officially called "Worker Peasant Red Guards."

Although North Korea stages military parades almost every year, and held one just before the Olympics began in South Korea in February this year, Sunday's parade came at a particularly sensitive time.

Kim's effort to ease tensions with President Donald Trump has stalled since their June summit in Singapore. Both sides are now insisting on a different starting point. Washington wants Kim to commit to denuclearization first, but Pyongyang wants its security guaranteed and a peace agreement formally ending the Korean War.

With tensions once again on the rise, a parade featuring the very missiles that so unnerved Trump last year, and led to a dangerous volley of insults from both leaders, could have been seen as a deliberate provocation. The North also refrained from immediately televising the event, though North Korean media were out in force to film it, deploying booms and — for possibly the first time — drones with cameras.

After a 21-gun salute, dozens of infantry units marched through Kim Il Sung Square, some in night-vision goggles or wielding rocket-propelled grenade launchers, as the current leader -- the founder's grandson -- looked on from a rostrum.

Li Zhanshu, one of the seven members of the Chinese Communist party's Politburo Standing Committee, the country's most powerful body, sat next to him, the two of them occasionally exchanging comments. 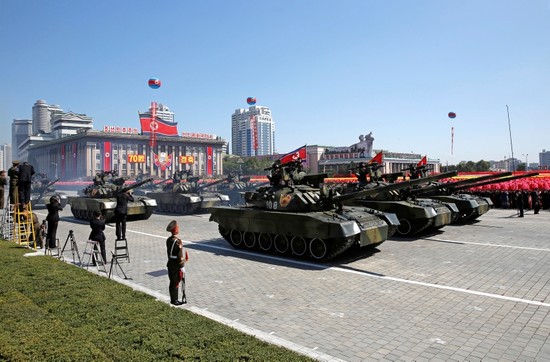 At one point jets trailing red, white and blue smoke -- the colors of the North Korean flag -- roared above the Juche Tower, the stone monument to Kim Il Sung's political philosophy.

Finally came the missiles, the traditional climax of the parades. But the only ones on show were the blue Kumsong-3, an anti-ship cruise missile, and the Pongae-5 surface-to-air weapon.

There was no sign of the Hwasong-14 and -15 missiles that can reach the mainland U.S. and changed the strategic balance when they were first tested last year.

"It looks like the North Koreans really tried to tone down the military nature of this," said Chad O'Carroll, managing director of Korea Risk Group.

"There was no display of ICBMs, IRBMs (intermediate-range ballistic missiles), which would really not have sat well with the whole idea that North Korea is committed to ultimate demilitarization. So I think it will be well received." 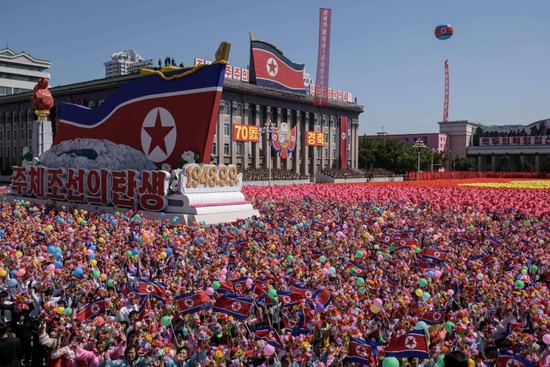 Immediately after the parade thousands of citizens walked through the square, escorting floats displaying economic themes and calls for Korean reunification.

Capital residents unable to attend at the square lined the streets around town to cheer and applaud convoys carrying the troops after they complete the parade duties.

The theme for the celebrations this year was unifying the Korean peninsula, divided since the 1950-53 Korean War. Floats on unification passed by a throng of North Koreans waving unified Korea flags.

"All Koreans should join forces to accomplish unification in our generation. Unification is the only way Koreans can survive," said an editorial in North Korea's party newspaper Rodong Sinmun.

Soon after the Sunday celebrations end, Kim will once again meet in Pyongyang with South Korean President Moon Jae-in to discuss ways to break the impasse over his nuclear weapons.

The "new line" of putting economic development first has been Kim's top priority this year. He claims to have perfected his nuclear arsenal enough to deter U.S. aggression and devote his resources to raising the nation's standard of living.

The mass games involve tens of thousands of people holding up placards or dancing in precise unison and are intended to be a display of national unity. This year's spectacle — tickets start at just over $100 and go up to more than $800 per seat — also has a strong economic theme.

An unofficial translation of its name this year is "Our Shining Nation."

The Democratic People's Republic of Korea, as the North is officially known, was proclaimed on September 9, 1948, three years after Moscow and Washington divided the peninsula between them in the closing days of the Second World War.