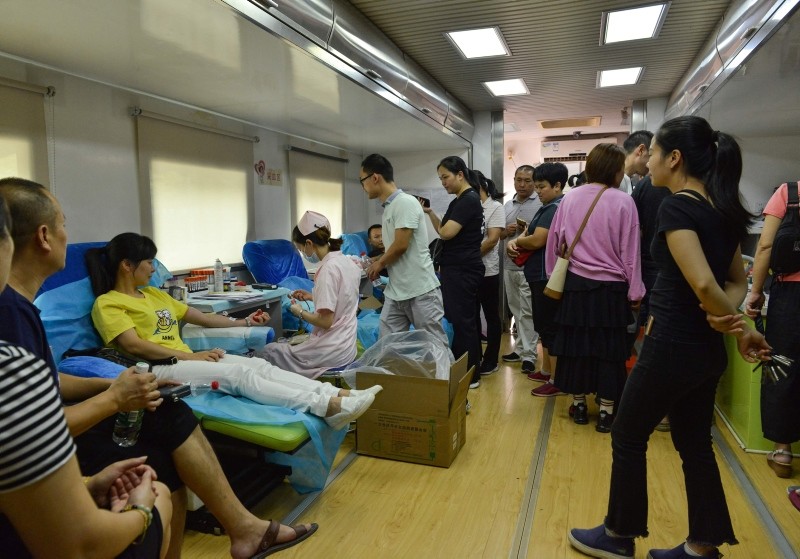 Residents donate blood in Hengdong, China's central Hunan province, on September 13, 2018 to help those injured after a man drove into a crowded public square on September 12. (AFP Photo)
by Associated Press Sep 13, 2018 12:00 am

The death toll has risen to 11 with another 44 people hospitalized after a man allegedly drove an SUV deliberately into a crowd in central China before jumping out and attacking victims with a dagger and shovel, local authorities said Thursday.

The Hengyang city government said the suspect in the case had previous convictions for crimes including drug trafficking, theft and assault and, acting alone, had sought to "get revenge on society."

That appeared to rule out terrorism, although vehicles have previously been used in attacks blamed on militant Muslim separatists from the Uighur ethnic minority group.

Police identified the suspect as 54-year-old Yang Zanyun from Hengyang's Hengdong county in the largely agricultural province of Hunan.

Tuesday night's attack happened in a public square where Chinese typically gather to dance in groups or enjoy the cool evening breezes. The SUV apparently appeared without warning, jumping the curb before plowing into the crowd.

China has experienced violent attacks in public places in recent years, including bombings and arson of buses and buildings.

Occasionally, the attacks are attributed to militant separatists, though such incidents have become less common in recent years amid a stifling security crackdown.

In 2013, an SUV plowed through a crowd in front of Beijing's Forbidden City before crashing and catching fire, killing five, including the vehicle's three occupants. Police blamed the attack on Uighur extremists inspired by jihadi ideology.

More commonly though, the motivation is identified as mental illness, alienation from society or a desire to settle scores.

Chinese law restricts the sale and possession of firearms, and mass attacks are generally carried out with knives or homemade explosives. Many of those incidents have occurred at schools, including several in 2010 in which nearly 20 children were killed, prompting a response from top government officials and leading many schools to beef up security.

However, in June, a man used a kitchen knife to attack three boys and a mother near a school in Shanghai, killing two of the children. Last year, police said a man set off an explosion at the front gate of a kindergarten in eastern China, which struck as relatives gathered to pick up their children at the end of the day, killing eight people.