Malaysia ex-PM Najib arrested over link to 1MDB, to be charged 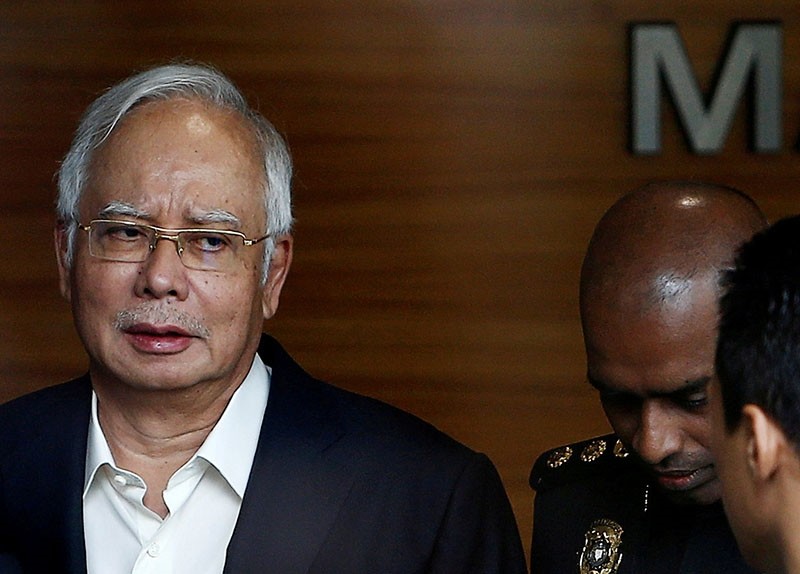 Malaysia's former Prime Minister Najib Razak arrives to give a statement to the Malaysian Anti-Corruption Commission (MACC) in Putrajaya, Malaysia May 24, 2018. (Reuters Photo)
by French Press Agency - AFP
Sep 19, 2018 12:00 am

Malaysia's former leader Najib Razak was arrested Wednesday and will be charged over allegations that $628 million linked to state investment fund 1MDB ended up in his personal bank accounts, officials said.

Allegations that Najib and his cronies looted huge sums from the investment vehicle were a major factor in the shock defeat of his long-ruling coalition in elections in May, at the hands of a reformist alliance headed by Mahathir Mohamad.

Mahathir, 93, in his second stint as premier after coming out of retirement to take on his ex-protege Najib, has reopened probes into 1MDB that were shut down by the former government, and vowed to bring Najib to justice.

Since losing power, Najib has already been arrested and hit with seven charges related to claims he pocketed some $10 million from a former unit of 1MDB.

However his arrest Wednesday was more significant as it related to a central allegation in the long-running scandal -- that huge sums from the fund flowed into his bank accounts before a hotly contested election in 2013.

The Malaysian Anti-Corruption Commission said in a statement that it had detained Najib as part of its investigations into the fund and "the entry of 2.6 billion ringgit ($628 million) into his personal account."

Najib will appear in court Thursday afternoon where he faces several charges related to abuse of power, the anti-corruption commission said.

James Chin, a Malaysia expert from the University of Tasmania, said Najib's current arrest was "much more significant" than his previous one.

"I think the Malaysian people will be very, very happy. There were complaints that the government was not moving fast enough on 1MDB," he told AFP.

When reports about the bank transfers surfaced in 2015, they represented a turning point in the 1MDB scandal and dramatically raised pressure on Najib and his inner circle.

The attorney-general later cleared Najib of any wrongdoing, saying the money was a personal donation from the Saudi royal family, and closed down domestic investigations.

But allegations related to wrongdoing at 1MDB continued to multiply and the leader lurched sharply to the right.

He sacked critics in government, jailed political opponents and introduced increasingly authoritarian laws that analysts said were aimed at silencing any criticism to his rule.

Analysts thought Najib's Barisan Nasional coalition, which had ruled Malaysia uninterrupted since independence from Britain in 1957, could never be beaten. But Mahathir capitalized on anger at the 1MDB scandal, and disillusionment at race-based politics in the multi-ethnic country, to push them from power.

Najib, his family and cronies were accused of using money stolen from 1MDB to buy everything from high-end real estate in the United States to pricey artworks. He and his luxury-loving wife Rosman Mansor became figures of hatred.

The U.S. Department of Justice, which is seeking to recover items allegedly bought with stolen 1MDB cash in America, estimates that $4.5 billion in total was looted from the fund.

Following Najib's election loss, police seized a vast trove of items -- including expensive handbags and jewelry -- from properties linked to him with an estimated value of up to $273 million.

Investigations into 1MDB have been moving swiftly. Last month a luxury yacht allegedly bought by a playboy financier with a central role in the scandal was returned to Malaysia after being handed over by Indonesia, which impounded it following a DoJ request.