Japan's Abe changes more than half of the Cabinet, key ministers remain 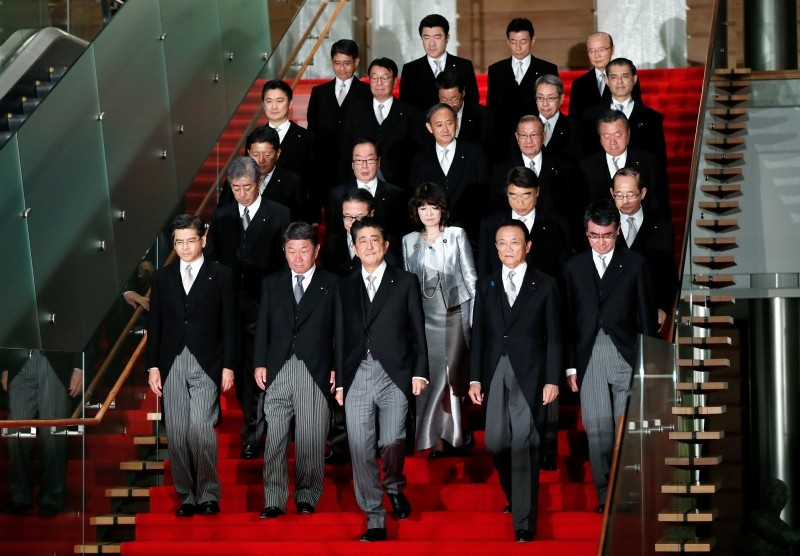 Japan's Prime Minister Shinzo Abe leads his cabinet ministers as they attend a photo session at his official residence in Tokyo, Japan October 2, 2018. (Reuters Photo)
by Compiled from Wire Services
Oct 02, 2018 12:00 am

Abe was re-elected in September to head the Liberal Democratic Party for a third term, paving the way to serve as Japan's leader for up to three more years.

"I will pursue economic and diplomatic policies built on a stable foundation after five years and nine months of accomplishment," Abe told a news conference Tuesday.

Abe has to re-solidify his grip on power in the party after his weaker-than-expected showing in the leadership election. He renewed more than half of the 19 Cabinet members, mostly his confidantes and supporters, to help his push for a constitutional revision, though hurdles remain high.

Abe, 64, has said he is determined to use his last term to pursue his long-sought amendment to Japan's U.S.-drafted pacifist constitution that many conservatives see as a humiliation imposed on Japan following its World War II defeat.

Abe said his party is working to submit a draft revision to parliament later this year and that he appointed Hakubun Shimomura, an ultra-conservative former education minister, to head the effort.

"I would like to see the discussion accelerated," Abe said.

He and his party want to rush a revision while their ruling coalition holds two-thirds majorities in both houses — a requirement to propose a revision ahead of a national referendum. The next parliamentary election is due next summer.

Abe wants to add a clause to Article 9 of the constitution, which bans the use of force in settling international disputes, to explicitly permit the existence of Japan's military, now called the Self-Defense Force.

He faces intensifying trade friction with the U.S. that could shake his friendly relations with President Donald Trump.

Abe and Trump agreed on Wednesday that the two countries would start talks on a bilateral trade accord. The U.S. has been pressuring the premier to open Japan's markets, especially for rice and beef, as Trump attempts to slash chronic U.S. trade deficits.

Abe repeated that he also seeks to meet with North Korean leader Kim Jong Un to resolve bilateral disputes, including the decades-old problem of Japanese citizens abducted to the North.

At home, he faces political challenges such as dealing with Japan's aging and declining population and a consumption tax hike to 10 percent that he has already delayed twice. He's also tasked with preparing for and carrying out a royal succession in the spring.

Abe, who has said he wants to create "a society in which all women shine," ditched two female ministers - Seiko Noda, an experienced lawmaker who served as internal affairs minister, and justice minister Yoko Kamikawa.

Satsuki Katayama was handed the portfolio for regional revitalization, becoming the sole female member of the new cabinet.

Asked why only one woman in his new cabinet at a news conference, Abe - who took office in 2012 - said his government "has just started" to promote female empowerment as one of his key policies.

In Japan, female lawmakers account for just 10.1 pe cent of the country's powerful lower house, ranking it 161st for female representation among the world's 193 countries, according to the Inter-Parliamentary Union.

The youngest member of the new cabinet is Masahiko Shibayama, a 52-year-old former lawyer, who has been appointed as education minister. The 19-member cabinet has only five members in their 50s.

Tuesday's reshuffle is the fourth for Abe. It followed his re-election as head of his Liberal Democratic Party (LDP) in late September, despite his involvement in a series of scandals.

The victory in the ruling party's presidential race is tantamount to winning the premiership.