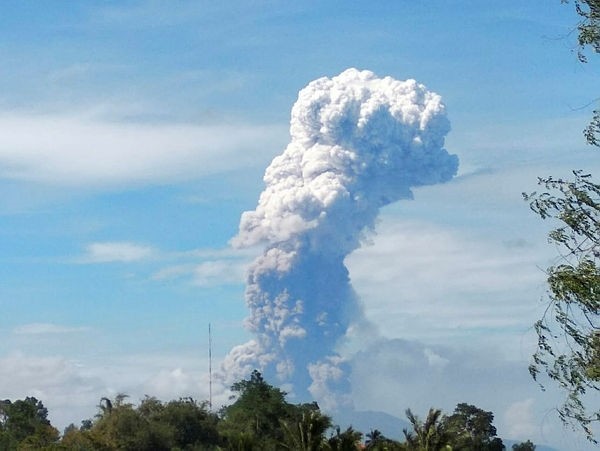 The Mount Soputan volcano in North Sulawesi province of Indonesia erupted, spewing a column of hot ash up to 4km high, according to a BNPB official. (EPA Photo)
by Compiled from Wire Services Oct 03, 2018 12:00 am

A volcano erupted Wednesday on Indonesia's Sulawesi island after it was hit by a tsunami and a 7.5 magnitude earthquake, killing more than 1,400 people.

A government volcanologist suspects the eruption was triggered by the 7.5 magnitude earthquake in Central Sulawesi on Friday.

"It could be that this earthquake triggered the eruption, but the direct correlation has yet to be seen as there had been an increase in the Mount Soputan activity," the volcanologist, Kasbani, told online news portal Tempo.

Kasbani, who uses one name and leads the Vulcanology and Geology Disaster Mitigation agency, said volcanic activity had been increasing at Soputan since August and began surging Monday. "It is possible that the quake accelerates (the eruption)," he added.

Soputan's eruption status was raised from an alert to standby 4 kilometers (2.5 miles) from the summit and up to 6.5 kilometers to the west-southwest. Standby status means the public should avoid the area nearest the volcano and have masks available in the event of ashfall.

Planes were warned of the ash clouds because volcanic ash is hazardous for plane engines.

The earthquake in Central Sulawesi set off a tsunami and has devastated several communities.

More than 2,500 people were heavily injured in the 7.5-magnitude quake and deadly tsunami waves it triggered last Friday, the agency said.

Indonesia, an archipelago of more than 250 million people, sits on the Pacific "Ring of Fire" and is prone to earthquakes and volcanic eruptions. Government seismologists monitor more than 120 active volcanoes.