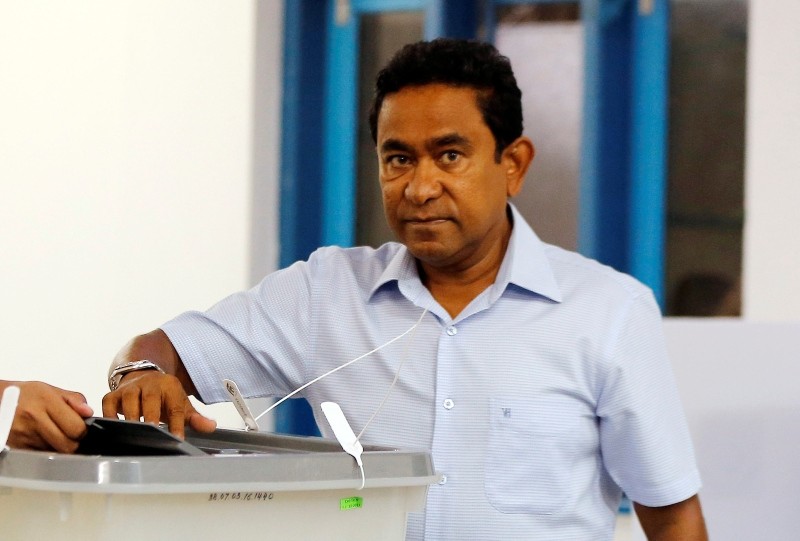 In this Sunday, Sept. 23, 2018, file photo. Maldivian President Yameen Abdul Gayoom casts his vote at a polling station during presidential election day in Male, Maldives. (AP Photo)
by Oct 21, 2018 12:00 am

The five-judge Supreme Court bench unanimously ruled that Yameen had failed to prove his claim that the September 23 vote won by opposition candidate Ibrahim Mohamed Solih was rigged.

Under pressure from abroad, Yameen initially conceded defeat and said he would stand down on November 17 -- but then this month filed his petition despite the threat of sanctions.

Yameen claimed magic ink had been used to rig the election and that ballots marked for him disappeared.

The five-judge bench had already refused to accept the testimony of three unnamed witnesses that Yameen's lawyers said would prove the election was fixed.

The next day Yameen went on national television to concede defeat a second time, making no reference to his controversial legal bid.

The country's independent Elections Commission, through its lawyers, had argued his petition was based on false allegations and should be dismissed.

Four of the five members of the Commission fled after the election, citing intimidation by Yameen's supporters.

Ahead of court hearings in the capital Male last week, the United States warned "appropriate measures" would be taken if the will of the Maldivian people was undermined.

Europe and India have also issued similar warnings in the past.

Yameen successfully lobbied the same court in 2013 to nullify election results as he trailed an opposition candidate, which ultimately allowed him to narrowly win a run-off poll.

He has ruled with an iron-fist ever since, crushing dissent and jailing or exiling all his major opponents.

The U.S. and its allies have been concerned by growing Chinese influence in the strategically positioned Indian Ocean archipelago, especially under Yameen's authoritarian rule.