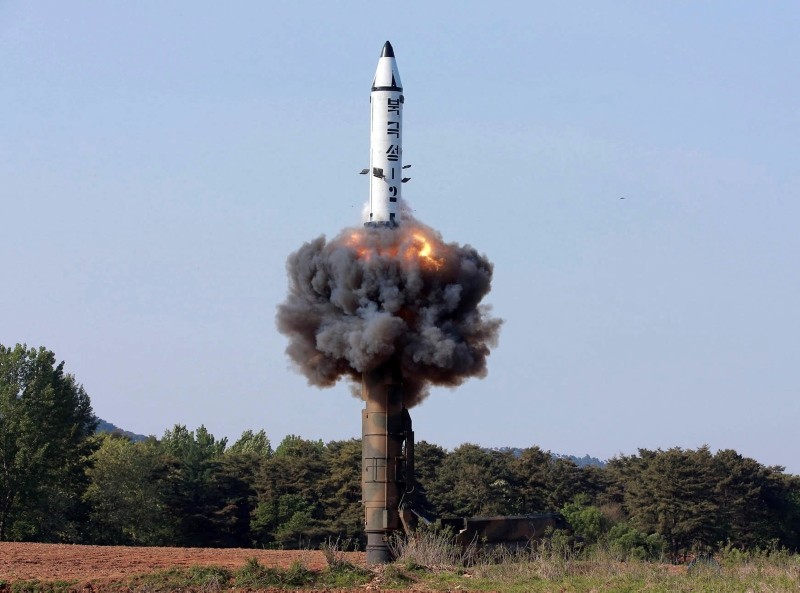 In this undated file photo distributed by the North Korean government on May 22, 2017, a solid-fuel ,Pukguksong-2, missile lifts off during its launch test at an undisclosed location in North Korea. (Korean Central News Agency/ via AP)
by Compiled from Wire Services Nov 12, 2018 12:00 am

A U.S. think tank said on Monday it had identified at least 13 of an estimated 20 undeclared missile operating bases inside North Korea, underscoring the challenge for American negotiators hoping to persuade Pyongyang to give up its nuclear weapons and long-range missiles.

In reports released by the Washington, D.C.-based Center for Strategic and International Studies, researcher Joseph Bermudez said maintenance and minor infrastructure improvements have been observed at some of the sites, despite the ongoing negotiations.

Although the sites are not launch facilities and in some cases are rudimentary, the authors of the report say they are hidden and illustrate the scope of the North's weapons program and the country's determination to conceal its military might.

"The dispersed deployment of these bases and distinctive tactics employed by ballistic missile units are combined with decades of extensive camouflage, concealment and deception practices to maximize the survival of its missile units from pre-emptive strikes and during wartime operations," they said.

The authors say that the sites, which can be used for all classes of ballistic missile, therefore should be declared by North Korea and inspected in any credible, verifiable deal that addresses Pyongyang's most significant threats to the United States and its allies.

North Korea analysts not involved in the report said the findings were not surprising given Pyongyang's past activities but were still cause for concern. They noted that Kim had not agreed to halt either nuclear weapons or missile development in negotiations with Trump or Secretary of State Mike Pompeo.

"The fact that North Korea has continued to build nuclear weapons and ballistic missiles in the midst of high-level diplomacy with China, South Korea, and the U.S. should not come as a surprise," said Abraham Denmark, the Asia program director at The Wilson Center. "Despite all the summitry, North Korea is just as dangerous today as it was a year ago."

"Improving relations with Pyongyang may be a laudable goal, but any claim that the North Korean nuclear and missile threats have been solved is either wishful thinking or purposefully deceptive," he said.

North Korean leader Kim Jong Un and U.S. President Donald Trump pledged to work toward denuclearization at their landmark June summit in Singapore, but the agreement was short on specifics and negotiations have made little headway.

Shortly after that summit, Trump tweeted that "there is no longer a Nuclear Threat from North Korea." The country has not conducted a missile flight test for nearly a year, which came as a relief for Japan.

North Korea declared its nuclear force "complete" and halted missile and nuclear bomb testing earlier this year, but U.S. and South Korean negotiators have yet to elicit from Pyongyang a concrete declaration of the size or scope of the weapons programs, or a promise to stop deploying its existing arsenal.

North Korea has said it has closed its Punggye-ri nuclear testing site and the Sohae missile engine test facility. It also raised the possibility of shuttering more sites and allowing international inspections if Washington took "corresponding measures," of which there has so far been no sign.

Last week, North Korea called off a meeting with U.S. Secretary of State Mike Pompeo in New York, and state media said on Monday the resumption of some small-scale military drills by South Korea and the United States violated a recent agreement aimed at lowering tensions on the Korean peninsula.

The sites identified in the CSIS report are scattered in remote, mountainous areas across North Korea, and could be used to house ballistic missiles of various ranges, with the largest believed to be capable of striking anywhere in the United States.

"Missile operating bases are not launch facilities," Bermudez wrote. "While missiles could be launched from within them in an emergency, Korean People's Army (KPA) operational procedures call for missile launchers to disperse from the bases to pre-surveyed or semi-prepared launch sites for operations."

None of the missile bases have been acknowledged by North Korea, and analysts say an accurate disclosure of nuclear weapons and missile capabilities would be an important part of any denuclearization deal.

Sakkanmol, the site closest to the border with South Korea and its capital Seoul, appears to be "active and being reasonably well-maintained," the report found.

"North Korea's decommissioning of the Sohae satellite launch facility, while gaining much media attention, obscures the military threat to U.S. forces and South Korea from this and other undeclared ballistic missile bases," Bermudez said.