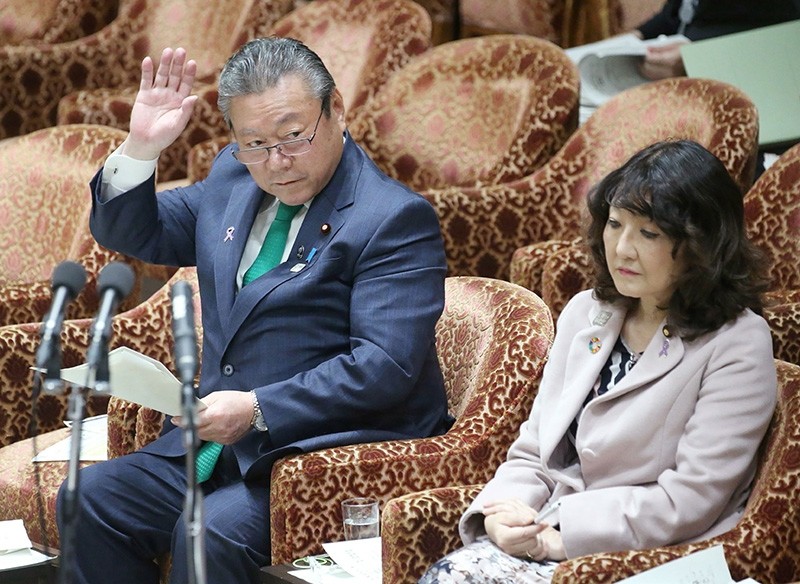 This Nov. 14, 2018 photo shows Yoshitaka Sakurada (L) raising his hand to answer a question beside Satsuki Katayama (R), minister in charge of regional revitalization and female empowerment, during a parliament session in Tokyo. (AFP Photo)
by Compiled from Wire Services Nov 15, 2018 12:00 am

A Japanese minister in charge of cybersecurity measures for the 2020 Tokyo Olympics told parliament that he has never used a computer in his life, local media reported on Thursday.

"Since I was 25 years old and independent, I have instructed my staff and secretaries. I have never used a computer in my life," Yoshitaka Sakurada said on Wednesday in response to an opposition lawmaker's question, according to Kyodo News agency.

He also made comments showing he has no idea what a USB port is. When asked about the power grid and malware, Sakurada said USB was "basically never used" in the utility systems, appearing to not know what it might be.

Lawmakers laughed incredulously at his replies, which were highlighted in Japanese media. Questioning and answers in Parliament are also carried live on national TV.

Ministers in Japan almost always get parliamentary questions in advance. Often their answers are based on briefings from ministry bureaucrats. In Sakurada's exchange, bureaucrats were seen rushing over to give him sheets of paper with information.

"It's a matter that should be dealt with by the government as a whole. I am confident that I am not at fault," Sakurada said.

Opposition lawmaker Masato Imai responded, "I find it unbelievable that someone who is responsible for cybersecurity measures has never used a computer."

Prime Minister Shinzo Abe appointed Sakurada as a cyber minister in October in a cabinet reshuffle, after the premier was re-elected as head of the Liberal Democratic Party.

Although the minister is not expected to have much hands-on responsibility in the handling of either cybersecurity or the Olympics, Sakurada's high-profile bungling is an embarrassment for Abe.

Sakurada, 68, a graduate of Meiji University, was first elected to parliament in 1996, representing Chiba prefecture, near Tokyo.

His favorite issues are pushing for Japan's economic prosperity and supporting its culture. "There is no genius that surpasses effort," is his favorite motto.