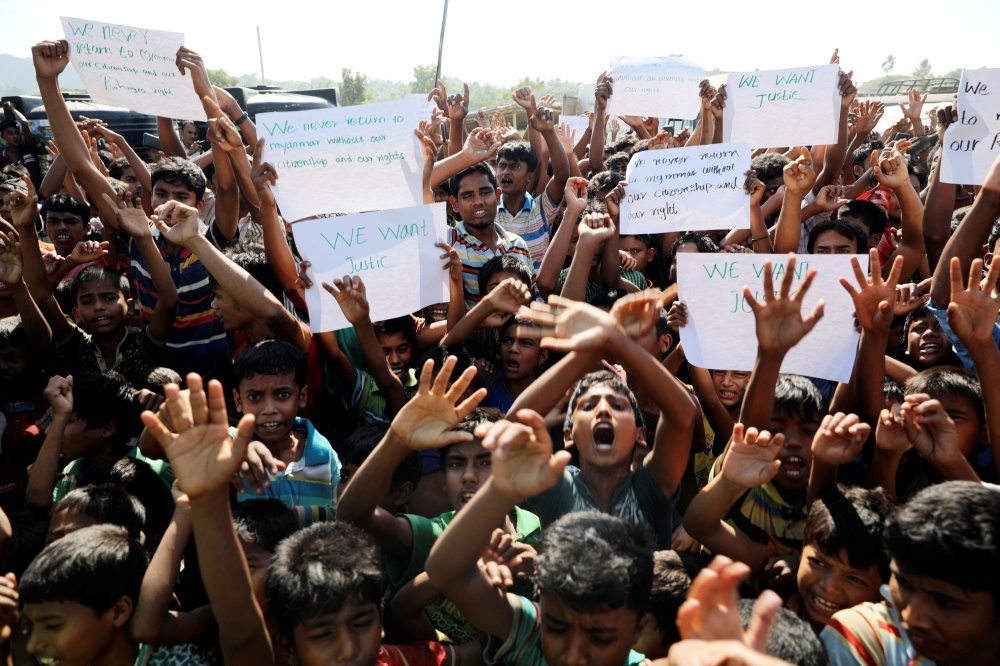 Hundreds of Rohingya refugees shout slogans as they protest repatriation at the Unchiprang camp, Teknaf, Nov. 15.
by Compiled from Wire Services Nov 16, 2018 12:00 am

Amid a series of warnings from aid groups, Bangladesh scrapped plans to begin the repatriation of thousands of Rohingya to Myanmar after officials were unable to find anyone willing to go back

The head of Bangladesh's refugee commission said plans to begin the repatriation of Rohingya Muslim refugees to Myanmar yesterday were scrapped after officials were unable to find anyone who wanted to return.

The refugees "are not willing to go back now," Refugee Commissioner Abul Kalam told the Associated Press, adding that officials "can't force them to go" but will continue to try to "motivate them so it happens."

The announcement came after about 1,000 Rohingya demonstrated at a camp in Bangladesh against returning to Myanmar, from where hundreds of thousands fled army-led violence last year. At the Unchiprang camp, one of the sprawling refugee settlements near the city of Cox's Bazar, another Bangladeshi refugee official had implored the Rohingya to return to their country over a loudspeaker.

"We have arranged everything for you, we have six buses here, we have trucks, we have food. We want to offer everything to you. If you agree to go, we'll take you to the border, to the transit camp," he said. "We won't go!" hundreds of voices, including children's, chanted in reply.

The repatriation of more than 2,200 Rohingya refugees to Myanmar was to start on Nov. 15, amid claims by the Bangladesh government that it is voluntary. However, rights groups urged Bangladesh to halt imminent plans to start returning Rohingya refugees to Myanmar, warning doing so risked further grave violations against the Muslim minority. The U.N. human rights office said it continued to receive reports of ongoing violations against Rohingya still in Myanmar and urged Dhaka to reconsider. "We are witnessing terror and panic among those Rohingya refugees in Cox's Bazar who are at imminent risk of being returned to Myanmar against their will," U.N. High Commissioner for Human Rights Michelle Bachelet said in a statement. The aid groups say that while it is true that Rohingya refugees want to return to their homes in Myanmar, they consistently say they will only do so after Yangon guarantees their citizenship, freedom of movement and physical safety.

Bangladesh and Myanmar agreed to begin the repatriation process in mid-November with 150 people every day in the first phase, as per an agreement signed between their governments in the capitals of Dhaka and Naypyidaw in November 2017.

The huge exodus of Rohingya began in August last year after Myanmar security forces launched a brutal crackdown following attacks by an insurgent group on guard posts. The scale, organization and ferocity of the operation led to accusations from the international community, including the U.N., of ethnic cleansing and genocide. Most people in Buddhist-majority Myanmar do not accept that the Rohingya Muslims are a native ethnic group, viewing them as "Bengalis" who entered illegally from Bangladesh, even though generations of Rohingya have lived in Myanmar. Nearly all have been denied citizenship since 1982, as well as access to education and hospitals.