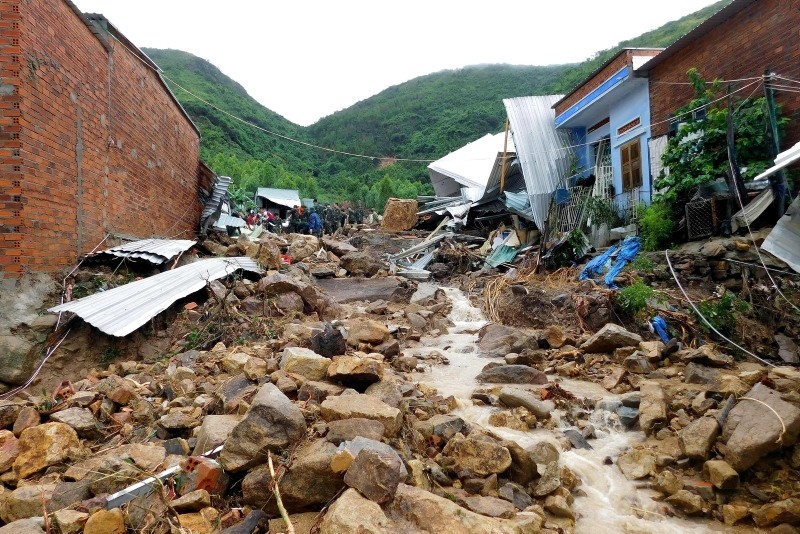 Damaged houses and debris are seen following flash floods and landslides in the Phuoc Dong commune of central Vietnam's Khanh Hoa province on November 18, 2018.(AFP Photo)
by Compiled from Wire Services Nov 19, 2018 12:00 am

Flash floods and landslides caused by a powerful typhoon have killed at least 12 people in central Vietnam, according to local media reports on Sunday.

Inundating rainfall and landslide have battered the central Khanh Hoa province in the last few days since Typhoon Toraji, a tropical cyclone blown in from the South China Sea.

The bad weather conditions also hit country's transportation as some railway services were suspended and the main highway linking north and south Vietnam was blocked temporarily.

A unit of hundreds of soldiers was also dispatched to the area to clean up destroyed villages and washed out roads.

At least a dozen people have been killed so far while a search was ongoing for several others, an official from the provincial disaster office told AFP, refusing to be named.

"We have mobilised hundreds of army troops to help people restore lives and clean up damaged roads," he said.

The main highway linking north and south Vietnam was temporarily blocked and some railway routes were interrupted, while images on state media showed destroyed houses buried under debris and vehicles submerged in floods.

Panicked residents told of running from their homes as landslides rumbled down nearby mountains.

"We ran away after hearing the huge sound of fallen rocks... When we returned a few hours later, all our houses were destroyed," said Nha Trang city resident Liem, quoted by Khanh Hoa province's official online news site.

Vietnam is routinely hit by heavy rains during typhoon season from May to October.

Natural disasters claimed at least 185 lives across the country in 2018. Last year, nearly 390 people died due to the same reason while the cost of the damage was $2.6 billion.