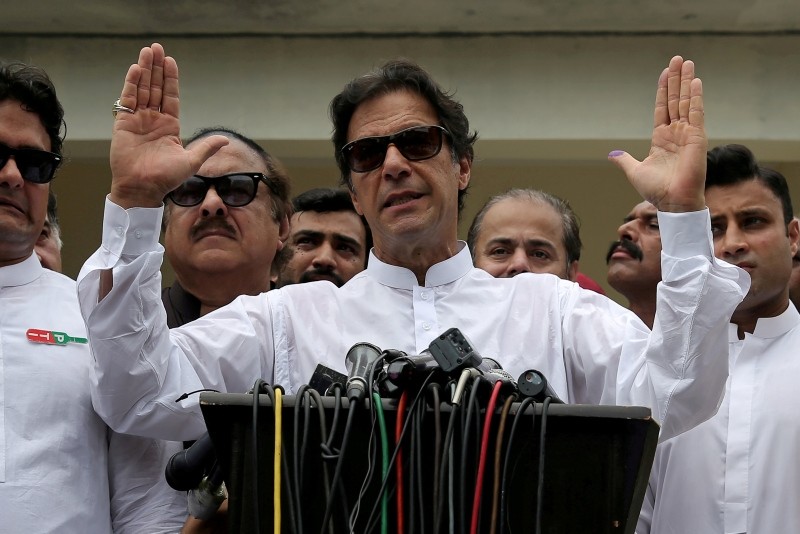 This file photo shows Imran Khan, chairman of Pakistan Tehreek-e-Insaf (PTI), speaks to members of media after casting his vote at a polling station during the general election in Islamabad, Pakistan, July 25, 2018. (Reuters Photo)
by Compiled from Wire Services Nov 19, 2018 12:00 am

Pakistan's prime minister fired back Monday after President Donald Trump accused the country of harboring Osama bin Laden despite getting billions of dollars in American aid.

Imran Khan tweeted that Pakistan had suffered 75,000 casualties and lost $123 billion in the "US War on Terror," despite the fact that no Pakistanis were involved in the Sept. 11 attacks. He said the U.S. has only provided a "minuscule" $20 billion in aid.

U.S. commandos killed bin Laden in a May 2011 raid in Abbottabad, Pakistan, where he had been living in seclusion in a house near a well-known military academy. Pakistan denies it knew bin Laden's whereabouts prior to the raid, which was carried out without its knowledge. It later arrested Dr. Shakil Afridi, who had run a fake vaccination campaign in Abbottabad to help the CIA confirm bin Laden's whereabouts.

In an interview with "Fox News Sunday," Trump said "everybody in Pakistan" knew bin Laden was there and no one said anything despite the U.S. providing $1.3 billion a year in aid. Trump said he had cut off the aid "because they don't do anything for us, they don't do a damn thing for us."

"Record needs to be put straight on Mr Trump's tirade against Pakistan," Khan, a former World Cup cricketer, wrote in a series of tweets defending his country's record in Washington's war on terror.

The U.S. and Afghanistan have long accused Pakistan of turning a blind eye to extremists and of harboring leaders of the Afghan Taliban. Pakistan denies those allegations, pointing to the heavy toll of its war against the Pakistani Taliban, a separate militant group that carries out attacks inside Pakistan.

Khan said Pakistan's tribal areas along the border have been devastated by years of war, with millions uprooted from their homes.

He also pointed to the logistical support Pakistan has provided for the U.S. war in Afghanistan. The main overland supply route for American forces fighting in Afghanistan runs through Pakistan.

Khan said the U.S. has made Pakistan a "scapegoat" for its failures in Afghanistan, where the Taliban are stronger than at any point since the 2001 U.S.-led invasion. "Instead of making Pakistan a scapegoat for their failures, the US should do a serious assessment of why, despite 140000 NATO troops plus 250,000 Afghan troops & reportedly $1 trillion spent on war in Afghanistan, the Taliban today are stronger than before," Khan wrote.

He also noted that Pakistan continues to provide the U.S. with supply lines into Afghanistan, adding: "Can Mr Trump name another ally that gave such sacrifices?"

"Living in Pakistan right next to the military academy, everybody in Pakistan knew he was there," he said, according to a transcript of the interview.

Khan did not respond to Trump's bin Laden comments.