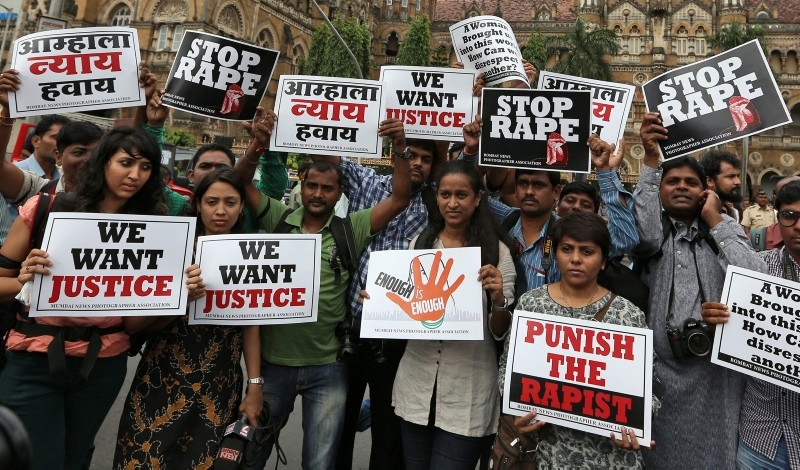 Indian photojournalists stage a protest rally in Mumbai, India, August 23, 2013, after a female colleague was gang raped by a group of men while being on an assignment in the dilapidated Shakti Mills in Mumbai. (EPA Photo)
by Dec 03, 2018 12:00 am

Two men accused of trying to molest a 20-year-old woman in northern India set her on fire two days later after she lodged a complaint with police, authorities and her family said.

Women in India have struggled to secure prosecution for sexual attacks in the face of widespread police indifference, rights activists say.

The woman was in a field near her home in the Sitapur district of Uttar Pradesh state when the men, both neighbors and known to her family, accosted her and tried to drag her away, her brother Vinod Kumar told Reuters.

She bit their hands and managed to break free and escape, and her father filed a complaint with police same day, he said. When no action resulted, the family lodged a second complaint.

"We waited for the police to come for inquiries the entire day but no one came," Vinod said.

The next day, the two men returned to the field where she was working, doused her with kerosene and set her on fire, Regional police superintendent Prabhakar Chaudhary told Reuters. She suffered burns to 40 percent of her body and was hospitalized.

Chaudhary said her suspected attackers were arrested and three policemen suspended for dereliction of duties.

After a gruesome gang rape of a young woman in 2012, India launched fast-track courts and a tougher rape law that included the death penalty. But crime statistics indicate sexual assault on women have risen, not fallen, since then.

Even if cases are registered, crime statistics show that police files remain open for about a third of all rapes that were investigated for each year between 2012 and 2016.

Rights groups have accused Indian police of bowing to pressure from local politicians to bury investigations. In some cases investigations of sexual assault have evaporated out of sheer police apathy, activists say.