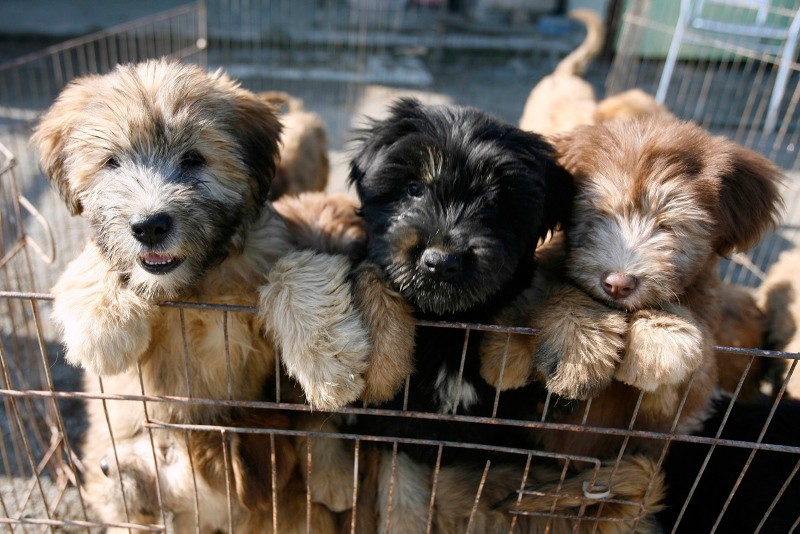 About 1 million dogs are eaten a year in South Korea, often as a summertime delicacy with the greasy red meat -- invariably boiled for tenderness -- believed to increase energy.

But the tradition has earned criticism abroad and has declined as the nation increasingly embraces the idea of dogs as pets instead of livestock, with eating them now something of a taboo among young South Koreans.

The Taepyeong-dong complex in Seongnam city, south of Seoul, housed at least six dog slaughterhouses that could hold several hundred animals at a time and was a major source for dog meat restaurants across the country.

It will be cleared over two days and transformed into a public park, Seongnam city officials said.

Slaughterhouse operators reportedly used the site for decades without proper authorizations, and after a yearslong legal battle, a Seoul court ruled the city council could force out the businesses.

Animal rights campaigners slammed the operators for mistreating dogs and killing them cruelly -- including electrocuting them before butchering them in the sight of other caged dogs.

Activists found electrocution equipment in the complex and a pile of dead dogs abandoned on the floor when they visited the site Thursday, according to the U.S. animal rights group Humane Society International.

"This is a historic moment," Korean Animal Rights Advocates (KARA) said in a blog post. "It will open the door for more closures of dog meat slaughterhouses across the country, expediting the decline of the overall dog meat industry."

According to a survey last year, 70 percent of South Koreans do not eat dogs, but far fewer -- about 40 percent -- believe the practice should be banned. It also found 65 percent support raising and slaughtering dogs in more humane conditions.

There are currently no laws on how to treat or slaughter canines for meat in South Korea. While farmers have urged Seoul to include dogs under livestock welfare regulations, animal rights groups oppose doing so, seeking complete abolition instead.