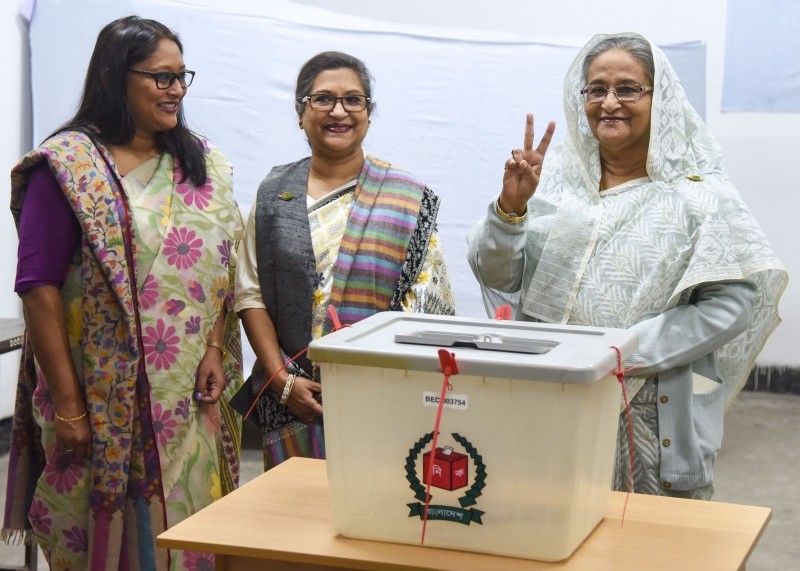 The unofficial results reported by local TV networks shows that the ruling party-led alliance won 281 out of 299 seats securing a third consecutive victory for Hasina, who has been governing the country since 2008.

Out of the 293 results announced, Hasin's Awami League got 259 seats and its ally Jatya Party secured 22 seats in the national parliament while the main opposition Bangladesh Nationalist Party (BNP) won only 6 seats.

To form a government in Bangladesh, a party needs 151 seats in the 350-seat parliament. 300 members of the parliament are elected directly by popular vote while 50 seats are reserved for women.

In a statement hours after the polls closed, Kamal Hossain, head of the opposition National Alliance (Jatiyo Oikyafront), told reporters the election was a "mockery" and demanded the commission cancel it.

Hossain said their candidates in 100 out of 298 constituencies across the country pulled out the election, citing various irregularities, including vote-rigging and capturing of polling stations by ruling Awami League party members and supporters.

Over 50 candidates of the main opposition Bangladesh Nationalist Party, all 25 candidates of its ally Jamaat-e-Islami party, and some other independent candidates were among those who boycotted the election, citing mass vote-stuffing and a "controlled election" allegedly by the government.

Some other small opposition parties, including the Islami Andolan Bangladesh and left-leaning Ganosamhati Andolon, also boycotted the election in the middle of the day-long voting.

Voting officially ended at 4 p.m. local time (1000GMT), amid deadly clashes across the country which left at least 17 dead and more than 60 injured.

The election commission and ruling party rejected the vote-rigging and election violence reports, saying the elections were mostly peaceful, fair, and non-violent nationwide.

In this election, some 104 million people were eligible to vote, including many young, first-time voters.

About 600,000 security officials, including army and paramilitary forces, were deployed across the country in a bid to contain violence in Bangladesh's 11th general election. Bangladesh's telecommunications regulator shut down mobile internet services nationwide to prevent possible protests from organizing.

Reuters reporters across the country witnessed sparse attendance at polling booths, and some voters alleged ruling party workers had blocked them from entering booths saying their ballots had already been cast. Campaign posters of the ruling party dominated streets in many parts of Dhaka.