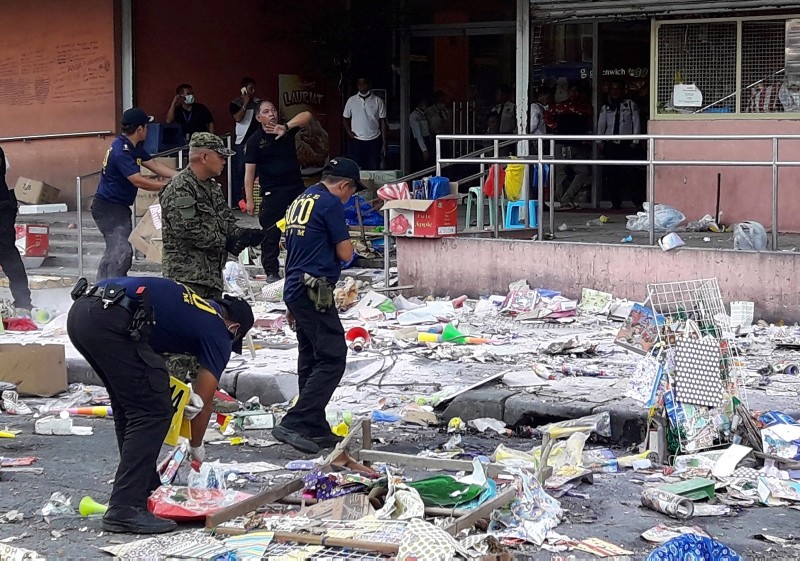 Members of the Philippine National Police (PNP) Scene of the Crime Operatives (SOCO) gather evidences on the site of an explosion on New Year's Eve outside a shopping mall in Cotabato City, southern Philippines, 31 December 2018. (EPA Photo)
by Associated Press
Jan 26, 2019 3:56 pm

Suspected militants remotely detonated a bomb near the entrance of a mall in the southern Philippines on Monday as people did last-minute shopping ahead of New Year's Eve celebrations, killing at least two and wounding nearly 30, officials said.

The bomb went off near a baggage counter at the entrance of the South Seas mall in Cotabato city, wounding shoppers, vendors and commuters. Authorities recovered another unexploded bomb nearby as government forces imposed a security lockdown in the city, military and police officials said.

Maj. Gen. Cirilito Sobejana said by phone that an initial investigation showed the design of the bomb was similar to those used in the past by local militants who have pledged allegiance to Daesh.

Government forces launched an offensive against the militants belonging to a group called "Daulah Islamiyah" last week and at least seven of the militants died in the fighting, Sobejana said.

"This is a part of the retaliation, but the problem is they're victimizing innocent civilians," he told reporters.

Supt. Romeo Galgo Jr., the deputy police director of Cotabato, said witnesses saw a man leave a box in a crowded area near the mall's entrance where vendors and shoppers were milling. The explosion shattered glass panels and scattered debris to the street fronting the mall.

Two of the roughly 30 people hit by the blast died while being brought to a hospital, Sobejana said.

"This is not just another terroristic act but an act against humanity. I cannot fathom how such evil exists in this time of merry making," she said.

"It is unimaginable how some people can start the new year with an act of cruelty but no matter how you threaten us, the people of Cotabato are resilient. ... We will stand up against terrorism," she told reporters.

The bombing, the latest in a number of attacks blamed on militants in the volatile region, occurred despite on-and-off military assaults against pockets of militant groups operating in the marshlands and hinterlands not far from Cotabato and outlying provinces.

Hundreds of militants aligned with Daesh laid siege in the southern city of Marawi in May last year, sparking five months of intense fighting and military airstrikes that left more than 1,100 mostly militants dead and displaced hundreds of thousands of villagers.

President Rodrigo Duterte placed the southern third of the country under martial law to deal with the Marawi siege, the worst security crisis he has faced since taking office in mid-2016.