9 injured as car rams into New Year's revelers in Tokyo 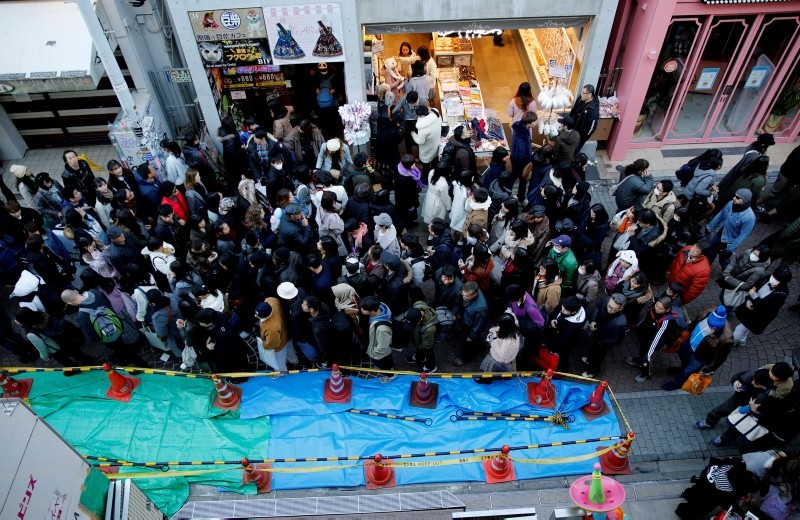 Pedestrians walk past a site where a vehicle ploughed into crowds celebrating New Year's Day in a popular tourist area of Harajuku in Tokyo, Japan (Reuters Photo)
by Compiled from Wire Services Jan 26, 2019 3:56 pm

At least nine people were hurt shortly after midnight on Tuesday when a man rammed his car into pedestrians on a Tokyo street in what he claimed was an act of terrorism, local media reported.

The suspect, 21, Kazuhiro Kusakabe, was arrested and being questioned, Tokyo Metropolitan Police said on customary condition of anonymity.

He is suspected of intentionally trying to kill people by driving the small vehicle through the street. NHK TV footage showed a small van with the entire front end smashed and officers and ambulance workers rushing to the scene.

According to national broadcaster NHK, Kusakabe told police he was acting in "retribution for the death penalty" without giving more precise details.

NHK footage showed a small box vehicle with a smashed front and paramedics carrying people on stretchers into ambulances.

A ninth person was injured after Kusakabe got out of the car and punched him, police said. His condition was not immediately known.

A large tank filled with kerosene was found in the car, police said. The suspect appeared to have planned to set his car on fire, Mainichi newspaper and other Japanese media reported. Police declined to comment on the reports, saying such possible motives were still under investigation.

The crash occurred early Tuesday on Takeshita Dori, a road well known to tourists and pop culture and fashion fans that runs right by Meiji Shrine in Harajuku, Shibuya ward.

Every New Year's Eve, the train line that includes Harajuku station runs all night, for people welcoming the new year with a shrine visit.

Japan is a relatively crime free nation with strict gun-control laws. In 2008, a man drove his car into a crowd in the popular Akihabara electronic-shopping district, got off and went on a stabbing spree with a knife. Seven people were killed.