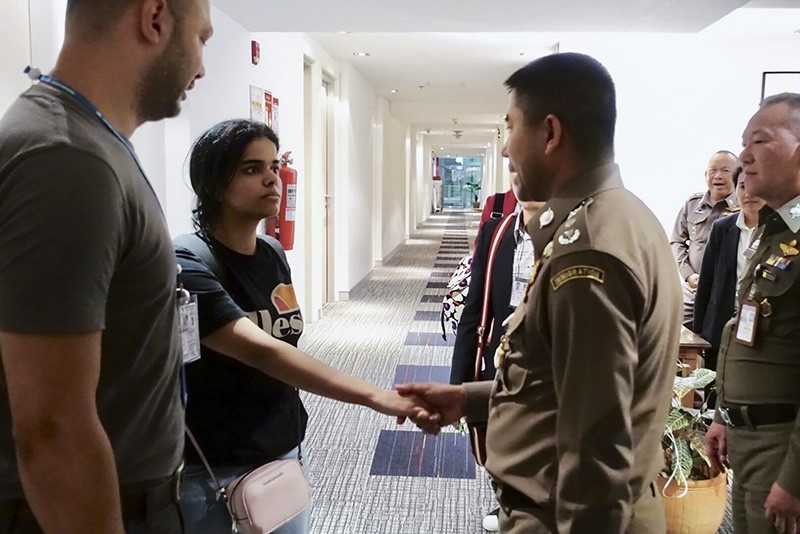 The Saudi woman who made a desperate plea for asylum after landing at Bangkok airport has been placed "under the care" of the United Nations refugee agency, a Thai official said late Monday.

Rahaf Mohammed Motlaq Alqunun told AFP she ran away from her family while traveling in Kuwait because they subjected her to physical and psychological abuse.

On Twitter, where Alqunun has accumulated tens of thousands of followers in about a day-and-a-half, she wrote of being in "real danger" if forced to return to her family under pressure from Saudi authorities, and has claimed in media interviews that she could be killed.

Alqunun told Human Rights Watch she was fleeing abuse from her family, including beatings and death threats from her male relatives who forced her to remain in her room for six months for cutting her hair.

Thai immigration chief Surachate Hakparn had said Sunday that Alqunun was denied entry because of her lack of documents.

But he made an abrupt about-face the next day, following a global media frenzy as the young woman pleaded on Twitter for different countries to help her.

After announcing that Thailand "will not force her" to leave, Surachate told reporters late Monday that Alqunun would be "allowed to stay" after a meeting with officials from the U.N. refugee agency UNHCR.

"She is under the care of the UNHCR now but we also sent Thai security to help take care (of her)," Surachate told reporters at Suvarnabhumi airport.

He said Alqunun had told UNHCR officials she "wants to stay in Thailand for a while while seeking asylum to a third country."

The agency "will take five days to consider her status" and another five days to arrange for travel, Surachate said, adding that he would meet with Saudi diplomats on Tuesday to explain Thailand's decision.

Following the announcement, a relieved Alqunun tweeted that she felt safe "under UNHCR protection with the agreement of Thailand authorities," adding that her passport had been returned to her after being taken away on Sunday.

Surachate had told reporters earlier Monday Alqunun was stopped by immigration because Saudi officials had contacted them to say she had fled her family.

"Thailand is a land of smiles. We will not send anyone to die," he said. "We will take care of her as best as we can."

The UNHCR said it had been granted access to Alqunun at the airport "to assess her need for international refugee protection and find an immediate solution for her situation".

Alqunun had posted a video on Twitter of her barricading her hotel room door with furniture.

She said Saudi and Kuwaiti officials had taken her passport from her when she landed -- a claim backed by Phil Robertson, deputy Asia director at Human Rights Watch.

Abdulilah al-Shouaibi, charge d'affaires at the Saudi embassy in Bangkok, told Saudi-owned TV channel Khalijia that the woman's father -- a senior regional government official -- had contacted the diplomatic mission for "help" bringing her back.

But he denied that her passport had been seized and that embassy officials were present inside the airport.

A Twitter statement from the Saudi embassy in Bangkok said Qunun was stopped by Thai authorities for "violating the law."

For runaway Saudi women — to whom Saudi law grants male relatives legal guardianship even if they are adults — fleeing can be a matter of life and death, and they are almost always doing so to escape male relatives.

The Associated Press reached Alqunun by telephone Sunday night in her hotel room and she spoke briefly, saying that she was tricked into giving up her passport on her arrival in Bangkok.

"Someone told me he would help me get a visa for Thailand, so I can go inside," she said "After that he took my passport. After one hour he came with five or four persons and told me my family wants me. And they knew I had run away and should go back to Saudi Arabia."

She has identified the man who took her passport variously as a Kuwait Airways employee or a Saudi Embassy official. She said Saudi and Thai officials then told her she would be returned to Kuwait on Monday, where her father and brother are awaiting her.

He was quoted in Saudi press saying that Alqunun was stopped by Thai authorities because she did not appear to have a return ticket, a hotel reservation or itinerary to show she was a tourist. He said the Saudi Embassy has no authority to stop anyone at the airport and that this decision rests with Thai officials.

"She was stopped by airport authorities because she violated Thai laws," he was quoted as saying in Sabq, a state-aligned Saudi news website.

"The embassy is only monitoring the situation," al-Shuaibi said.

Alqunun's plight mirrors that of other Saudi women who have tried to flee abusive or restrictive family conditions.

A Saudi activist familiar with other cases of females who've run away said often the women are young, inexperienced and unprepared for the obstacles and risks involved in seeking asylum when they attempt to flee.

Speaking on condition of anonymity for fear of repercussion, the activist said there have been instances where Saudi women runaways were stopped by authorities in Hong Kong or the Philippines en route to Australia or New Zealand. In some cases, Saudi authorities have been involved in forcing women to return to their families and in other cases local authorities suspect the women of seeking asylum and deport them.

Alqunun appears to have attempted to flee while on a family visit to Kuwait.

Saudi Arabia requires that a woman have the consent of a male relative — usually a father or husband — to obtain a passport, travel abroad or marry.

Saudi women runaways, however, have increasingly turned to social media to amplify their calls for help.

In 2017, Dina Lasloom triggered a firestorm online when she was stopped en route to Australia where she planned to seek asylum. She was forced to return to Saudi Arabia and was not publicly heard from again, according to activists tracking her whereabouts.