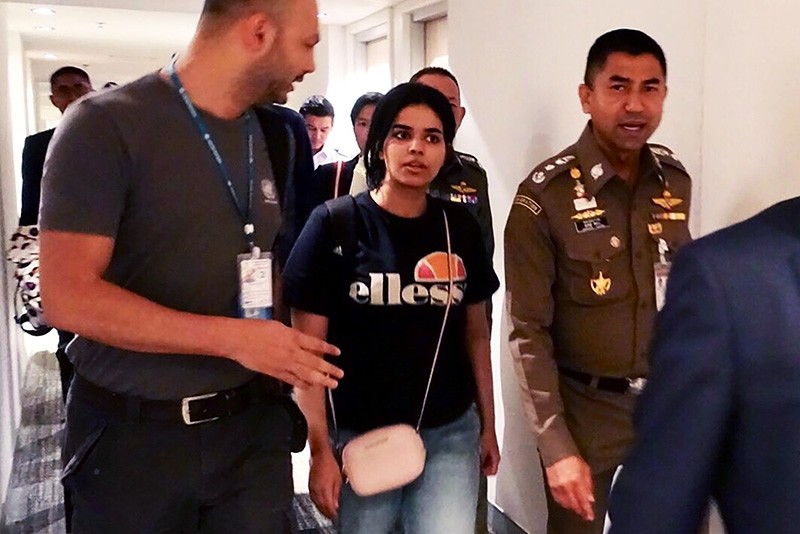 Handout picture from Thai Immigration Bureau on Jan. 7, 2019, shows Rahaf Mohammed Alqanun (2nd-L) being escorted by Thai immigration officer and UNHCR officials at the Suvarnabhumi international airport in Bangkok. (via AFP)
by Compiled from Wire Services Jan 08, 2019 12:00 am

Australia will "carefully consider" the asylum plea of an 18-year-old Saudi woman who fled to Thailand over the weekend, an official said Monday.

"The Australian Government is pleased that Ms Rahaf Mohammed Alqunun is having her claim for protection assessed (by the U.N.)," a Department of Home Affairs official told AFP.

"Any application by Ms Alqunun for a humanitarian visa will be carefully considered once the UNHCR process has concluded."

Alqunun arrived at Bangkok's main airport on a flight from Kuwait after running away from her family, who she alleges subjected her to physical and psychological abuse.

Alqunun said she planned to seek asylum in Australia, fearing she would be killed if sent back by Thai immigration officials who stopped her at the airport on Sunday.

Human Rights Watch has called on the Australian government to allow Alqunun's entry into that country.

Alqunun says she had a visa to continue her journey to Australia, but media reports say the Australian government has now canceled it.

Human Rights Watch's Australian director, Elaine Pearson, said since Australia has expressed concern in the past about women's rights in Saudi Arabia, it should "come forward and offer protection for this young woman."

The UNHCR, which is providing protection to Alqunan, said it was "very grateful" Thai officials did not send Alqunun back against her will. She has been allowed stay in the country temporarily while seeking asylum in a third country.

"It could take several days to process the case and determine next steps," the UNHCR representative in Thailand, Giuseppe de Vicentiis, said in a statement.

Thailand is not a signatory to a U.N. convention on refugees, and asylum seekers are typically deported or wait years to be resettled in third countries.

The UNHCR insists anyone with an asylum claim should not be sent back to the country they fled under the principle of non-refoulement.

Thailand's immigration police chief met Tuesday with officials of the Saudi Embassy in Bangkok, and said the officials told him they are satisfied with how Alqunan's case has been handled.

Maj. Gen. Surachate Hakparn explained the Saudi reaction to reporters after a meeting with its diplomats. Saudi officials say they have had nothing to do with Alqunun's case and are not demanding her return, and that the controversy is strictly a family matter.

In an earlier and separate explanation released on Twitter, the Saudi embassy denied sending officials to Suvarnabhumi airport to meet Alqunun as she arrived via Kuwait or impounding her passport – as she alleged.

It also said the embassy had made contact with her father, a senior regional government official in the kingdom, "to inform him on her situation."

Surachate said Alqunun's father and brother were due to arrive soon in Bangkok, but that it was her decision whether to meet with them. On Twitter, she has expressed fear of such a meeting. The father had previously been expected Monday night.

Saudi Arabia's human rights record has been under heavy scrutiny since the murder of journalist Jamal Khashoggi last year.

The ultracconservative kingdom has some of the world's toughest restrictions on women, including a guardianship system that allows male family members to make decisions on behalf of female relatives.

Alqunun has said she believes she will be imprisoned or killed if sent back, and that her family is so strict it once locked her in a room for six months for cutting her hair.

Under the hashtag #SaveRahaf, the young woman's desperate pleas became a social media sensation, and she was able to post live updates and videos from the Bangkok airport in both Arabic and English, racking up more than 80,000 followers.