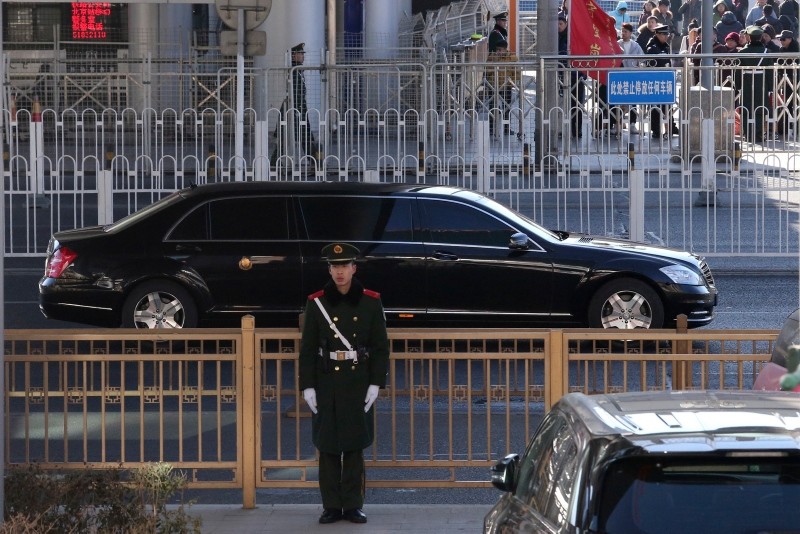 A sedan which is believed to carry North Korean leader Kim Jong Un leaves a train station with a convoy in Beijing, China, Tuesday, Jan. 8, 2019 (AP Photo)
by Compiled from Wire Services Jan 08, 2019 12:00 am

Kim and his delegation were then escorted by Chinese police to the Diaoyutai State Guesthouse.

Kim will be in Beijing until Thursday, according to Chinese media. This is his fourth visit to China and is being held amid speculation that Kim and U.S. President Donald Trump are discussing a new summit focused on ridding North Korea of its nuclear weapons.

Kim is starting his trip on what is believed to be his 35th birthday, Yonhap said.

South Korean media had reported earlier that a special train carrying a high-ranking North Korean official had crossed into China on Monday night.

For more than six years, the leader of North Korea remained cloistered inside his country. Then Kim Jong Un emerged – his arrival in Beijing on Tuesday marked his sixth foreign visit in less than 10 months.

His travels started in China in March 2018, followed one month later with a step over the border to the southern side of the demilitarized zone that divides the two Koreas, where he met his South Korean counterpart Moon Jae-in. Four of Kim's trips have been to China, signaling its importance to North Korea.

But while South and North Korea have continued to mend their relations over the past year, denuclearization negotiations between Pyongyang and Washington appear to have stalled.

In a New Year's address last week, Kim reaffirmed his commitment to denuclearization but warned he could take a "new path" if the U.S. clung to sanctions against his regime.

Kim is also expected to travel to Seoul for the first time this year.

South Korea on Tuesday praised Kim's visit to China and expressed hope it would contribute to denuclearization and peace, Yonhap said.

South Korea says it hopes North Korean leader Kim Jong Un's trip to China will act as a "stepping stone" for a second summit between Kim and President Donald Trump.

South Korean presidential spokesman Kim Eui-kyeom made the comments a few hours after Kim arrived in Beijing on Tuesday aboard a special train for a four-day visit.

South Korea's liberal President Moon Jae-in favors a negotiated solution to the North Korean nuclear confrontations. He has facilitated a flurry of high-profile nuclear diplomacy between North Korea and the United States, including Kim's summit with Trump in Singapore last June.