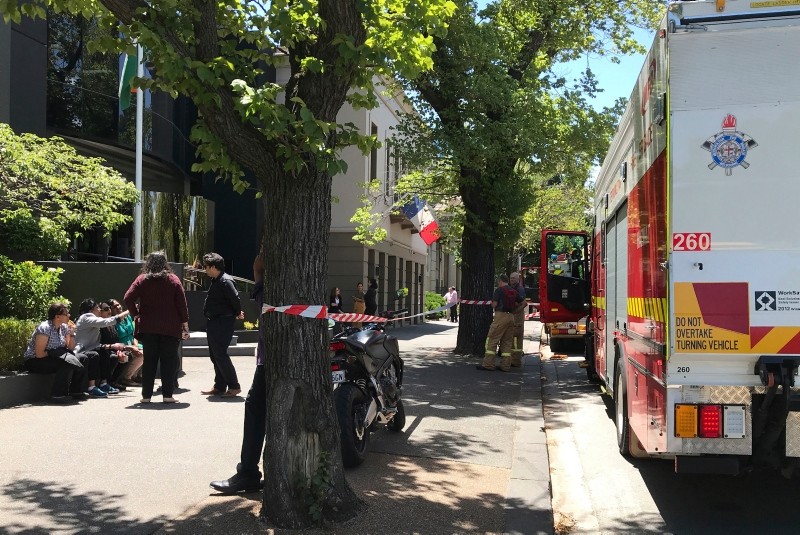 Firefighters, right, are seen outside the Indian and French consulates on St Kilda Road in Melbourne, Wednesday, Jan. 9, 2019 (AP Photo)
by Compiled from Wire Services Jan 09, 2019 12:00 am

Australian Federal Police (AFP) and emergency services were investigating "suspicious packages" delivered to embassies and consulates in Canberra and Melbourne on Wednesday.

The diplomatic missions in Melbourne include Indian, French, Korean, Swiss and German ones, according to authorities. It is not clear which embassies in Australia's capital Canberra were affected.

Police, fire crews and ambulances were seen at a number of diplomatic offices in Melbourne, including those of India, Germany, Italy, Spain and South Korea. The government Vic Emergency website noted at least 10 "hazardous material" incidents in the city.

"The circumstances surrounding these incidents are being investigated," the Australian Federal Police said in a statement.

The Australian Broadcasting Corp. reported suspicious packages were also found at the Melbourne consulates of the United States, Switzerland, Pakistan and New Zealand, and possibly those of Greece, France, and Hong Kong.

An incident at the South Melbourne building where the Turkish Consulate is located is also under investigation.

Speaking to Anadolu Agency (AA) about the incident, the deputy consul general of Turkey in Melbourne said a package was delivered to the consulate with a "warning sign." Osman İlhan Şener said the package had written on it: "Sample. Do not open. Very dangerous material. Use a mask and approach with caution." Şener said the package was handed to police, and that there was nothing to worry about for the time being.

It was not immediately known which countries' diplomatic missions in the national capital, Canberra, were affected.

The ABC reported one New Zealand consulate worker had said the packages in question were envelopes labeled "asbestos." Inside were plastic sandwich bags containing fibrous material.

Two firetrucks, a hazardous materials vehicle and police cars were seen at India's consulate in Melbourne, where staff members had been evacuated, some wearing protective masks.

Staff were later allowed to re-enter the building, which was deemed safe by Vic Emergency, the collective body of emergency agencies in Victoria state, of which Melbourne is the capital.

"At this time we believe the matter is targeted and not impacting the general community," Victoria Police said, adding it was assisting the federal police and other agencies with the investigation.

Staff evacuated from the Indian Consulate in Melbourne told reporters they had been asked not to comment.

"Inside the envelope was a white material in plastic with a label: 'asbestos'," Erb said. "We put the envelope in another plastic bag and called the emergency service, who arrived within 10 minutes."

He said the content of the envelope was not bio-hazardous in nature.

"It is not something that we have ever known to have received. In fact, we don't know if anyone in the Melbourne consular district has ever received such a threat," Erb said, adding that the consulate was still closed to the public.

"You have to treat these things as serious until they are not."

On Monday, the Sydney-based Argentinian consulate was evacuated for more than an hour after reports of suspicious white powder. It was later deemed not dangerous.