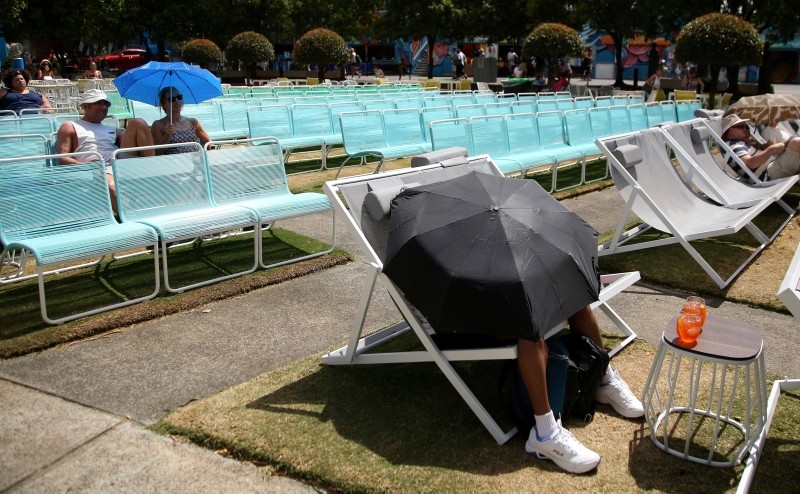 Spectators protect themselves from the heat with umbrellas as they watch tennis on a large video screen in Garden Square at the Australian Open tennis championships in Melbourne, Australia, Jan. 25, 2019. (AP Photo)
by Associated Press
Jan 25, 2019 10:49 am

Melbourne reached 42 .8 C (109 F) by early afternoon before a sudden cooldown, though the outskirts of the city remained hot, with the airport recording 46 C (114.8 F). It was the hottest day since 2014 in the Victoria state capital, which has a population of 5 million.

The power grid began load sharing as temperatures climbed in the early afternoon, with 30,000 households and businesses at a time being switched off for as long as two hours so that supply could keep up with demand.

"The situation changed very, very quickly," she told reporters. "People should be rightly disappointed that the power grid was not up to the task today."

Scores of wildfires are raging in heatwave conditions across much of drought-parched southeast Australia, with authorities warning the fire risk is high.

At the Australian Open in Melbourne, tennis fans shielded themselves with umbrellas and walked by water sprinklers for relief. On Thursday, the tournament had invoked its extreme-heat policy and closed the main stadium's roof during a women's semifinal match.

Heat records have tumbled across Australia's southeast in recent days. The small town of Swan Hill recorded its highest ever maximum of 47.5 C (117.5 F) on Friday and the renowned winemaking town of Rutherglen recorded its warmest ever overnight minimum of 29.3 C (84.7 F).

"The heatwaves we have had since the start of summer are almost unprecedented," meteorologist Kevin Parkin said.

"Relentless days of 40-plus degrees followed by warm nights — is it any wonder people and communities in that part of the world are doing it tough?" he added.

Bureau of Meteorology forecasters say this January is on track to become Australia's hottest January on record with heatwave conditions likely to persist.