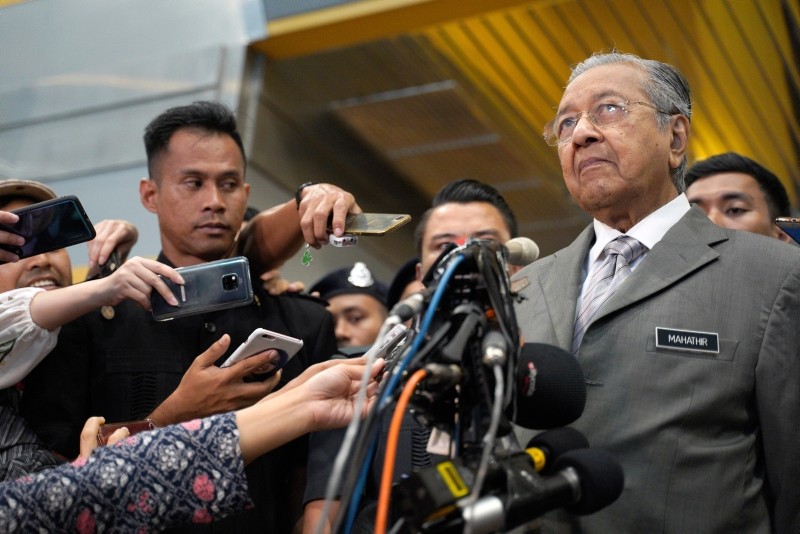 Prime Minister Mahathir Mohamad has branded Israel a "criminal state", hitting back at a decision to strip Malaysia of the right to host a major swimming event for refusing to let Israelis participate.

The International Paralympic Committee (IPC) announced at the weekend that Malaysia would no longer be staging the 2019 World Para Swimming Championships as authorities had failed to provide guarantees that Israelis could take part.

The championships, a qualifying event for the 2020 Tokyo Paralympics, were due to take place in Kuching from July 29-Aug. 4 with 70 countries participating.

Muslim-majority Malaysia has no diplomatic relations with the Jewish state and entry to the country on an Israeli passport is forbidden, but the IPC had received assurances in 2017 that all eligible athletes would be able to participate in the event.

However the situation changed after a new government headed by 93-year-old Mahathir, long known for his tirades against Israel, came to power in Malaysia last year.

Following the IPC decision, Mahathir struck a defiant note, with a long entry on his blog listing examples of what he claimed was unfair treatment of the Palestinians by Israel.

"Israel is a criminal state and deserves to be condemned," he wrote late Monday in his post titled "A Genocidal State."

"We stand by our principle, which is that Israel is a criminal nation. It has been breaking international law without anybody saying anything," he added.

Mahathir said that Israel was created from a "slice of Palestinian land", with no referendum or a plebiscite being held, adding that the Palestinians were expelled from their lands without any "compensation" provided for the land and homes seized by the Israelis.

He also called on those who sympathize with the Palestinian cause to voice their condemnation for the "blatant inhumanity" of Israel.

"The whole world can see the injustice and the oppression of the Palestinians by the Israelis. But Israel is not even criticized by the people who talk so much about freedom from oppression and the rule of law," he said.

Noting that Malaysia is not "anti-Jew" or "anti-Semitic", Mahathir said the country reserves the right to condemn inhuman and oppressive behavior anywhere and by anyone.

Sports Minister Syed Saddiq Syed Abdul Rahman said Malaysia will not compromise on its decision "on the ground of humanity and compassion for the Palestinian plight."

The government earlier this month said no Israeli delegates can enter Malaysia for sporting or other events in solidarity with the Palestinians.

At least 245 Palestinians have been killed by Israeli fire since March, mostly during protests and border clashes but also by tank fire and air strikes. Two Israeli soldiers have also been killed.

Israel and Prime Minister Benjamin Netanyahu accuse Gaza rulers Hamas of orchestrating the protests and argue that Israel's actions are aimed at defending the border.

Meanwhile, Polish swimmer Bart Kizierowski -- who represented his country at four Olympics -- pulled out of a job coaching the Malaysian team due to the refusal to allow Israelis to attend the tournament, local media reported.

In a Facebook post, Kizierowski said he rejected the position due to Malaysia's refusal to grant visas to some athletes, adding: "There is no place for that in sport."

The Star newspaper reported that sports officials in Malaysia had already announced his appointment.