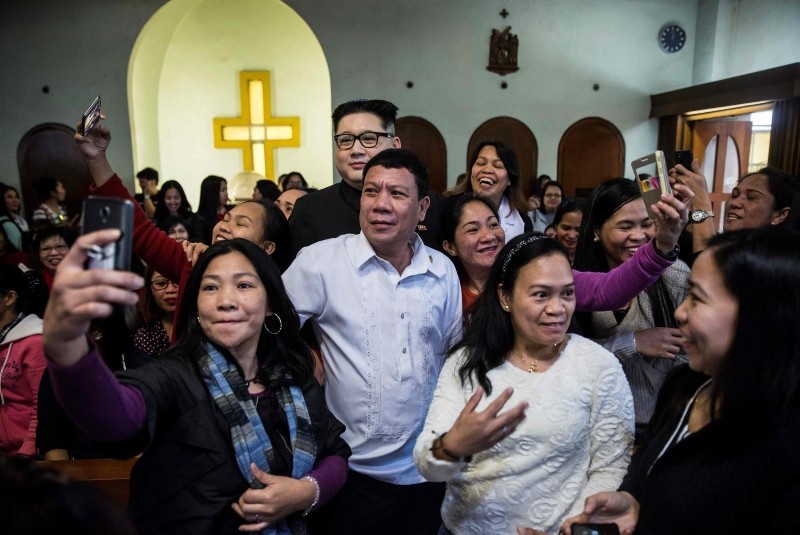 A Rodrigo Duterte impersonator sparked frenzy and confusion during Sunday mass when he walked into a Hong Kong church popular with the city's Filipino community.

Hundreds of distracted worshipers erupted into cheers and took photos of the impersonator, who goes by the stage name Cresencio Extreme.

They settled down for the hour-long service but many continued to grin and glance at him.

"Is that Duterte?" whispered an incredulous-looking woman, who said the man appeared too young to be the Philippine leader.

As soon as mass ended, worshipers mobbed Cresencio Extreme, many screaming and taking photos with their mobile phones as he waved at them and shook their hands.

Outside the church, some examined photos of the impersonator, saying it was odd that he did not have any bodyguards and that his personality seemed off.

While most did not mind the stunt, one woman who identified herself as Linda found it "impolite".

"Coming in here to make a scene — our Duterte is not like that," she told French Press Agency (AFP).

The Philippine president has repeatedly attacked the Church since taking office in 2016, accusing the Catholic clergy of sexual abuse.

And the Church has been one of Duterte's most outspoken critics, particularly over alleged human rights abuses during his deadly anti-narcotics campaign.

Hong Kong is home to around 200,000 Filipinos, mostly women working as domestic helpers.