Muslims in Philippines vote in second round of autonomy poll 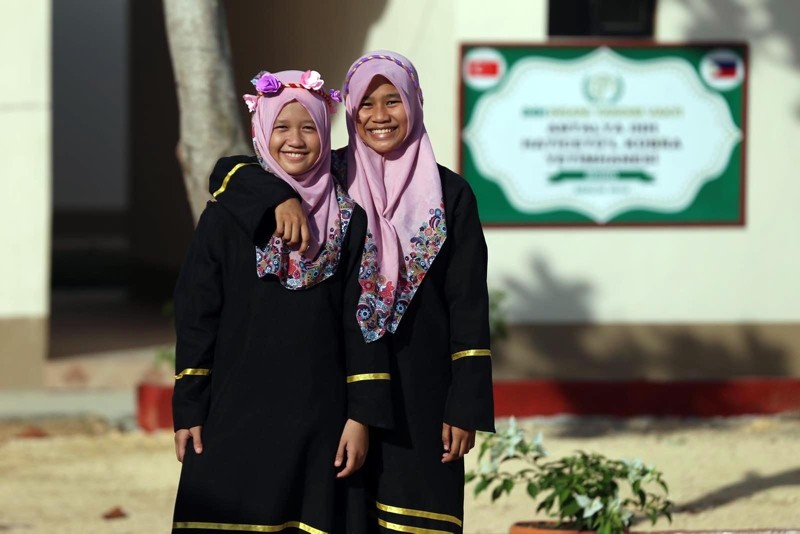 Two Muslim women living on the southern Philippine island of Mindanao stand next to a development project completed by Turkey's IHH aid agency in December 2018. (AA Photo)
by Anadolu Agency Feb 06, 2019 10:24 am

The second round of a plebiscite that granted the Philippines' Bangsamoro the long-awaited comprehensive autonomy will take place on Wednesday for its expansion.

Bangsamoro is a collective term for Filipino Muslims living on an island and archipelago south of the Philippines.

Freedom of the Muslims in the region had for centuries was taken away from them by the Spanish, who occupied and started to Christianize the Philippines in the 16th century. After Spanish defeat at the hands of Americans in 1898, the Moros became under U.S. invasion.

The Bangsamoro people, who were already deprived of freedom during the U.S. occupation, also faced harsh times due the Christian settlement policy of the Manila government, when Americans left the region to the Philippine Christians after managing it until 1946.

Since then numerous talks were held between the Philippine government and the Muslim groups, yet they failed to yield any result.

However, the course of the issue had changed when Rodrigo Duterte became Philippine's president in 2016.

The FAB constituted a roadmap for a final settlement which allowed for an autonomous region administered by minority Muslims in the south of the predominantly Catholic country.

The 2014 deal brought the 17-years of negotiations to a close and ended a decades-old armed conflict in the country's south.

The Philippines' landmark BOL was officially ratified on Jan. 25 following the first round of the plebiscite win on Jan. 21 on granting comprehensive autonomy to Moro Muslims.

More than 1.54 million people voted Yes, which corresponds to over 85 percent, to approve the BOL, while some 190,000 voted down the law, according to the official results.

The first voting included the provinces of Maguindanao, Lanao Del Sur, and the island provinces of Basilan, Tawi-tawi and Sulu as well as the cities of Cotabato and Isabela.

The second phase of the BOL will be held in six towns -- Tagoloan, Balo-i, Pantar, Munai, Nunungan and Tangcal -- in northwestern Lanao del Norte and in 67 residential areas in North Cotabato.

They will be asked whether they want to join the newly-formed BARMM.

The second phase will ensure a larger BARMM area, and once the phase is completed, an interim administration will be formed to take the region to the elections.

Under the law, courts of Islamic law will open in the region, and the Philippines' central government will transfer its administrative authorities in Mindanao to the Bangsamoro government.

The waters in the Bangsamoro region will be simultaneously managed by the national government and Bangsamoro government.

The autonomous government will be responsible for the management of energy resources.

The Muslims will be free in their internal affairs, while they will be bound to the Philippines in foreign affairs, however they will have some flexibility.