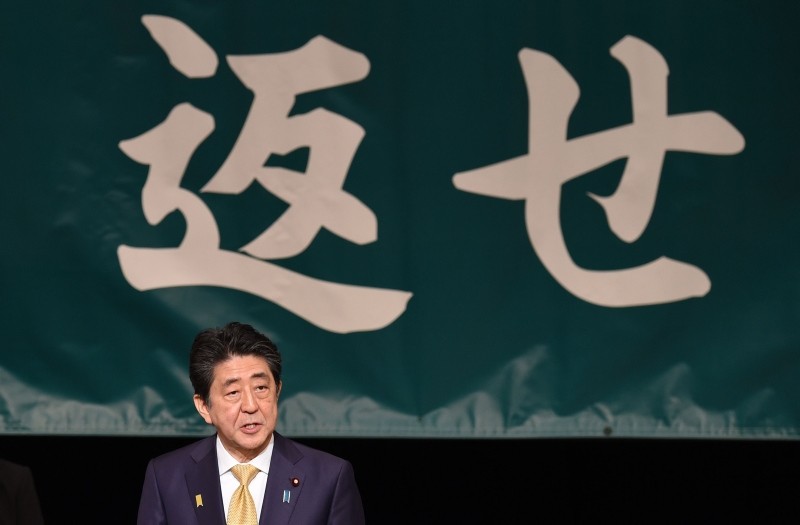 Japanese Prime Minister Shinzo Abe struck a conciliatory tone with Russia at an annual rally Thursday to demand the return of small isles claimed by both nations.

Speaking at a rally of former residents of four islands seized by Russia in the final days of the World War II, Abe did not explicitly demand sovereignty of the Southern Kuril islands, an emotive issue that has prevented the Asian economic power from signing an official peace treaty with Moscow since the war.

Instead, he vowed to focus on concluding an official peace treaty with Russia, after meeting President Vladimir Putin 25 times, most recently last month.

Abe said settling the conflict over what Japan calls its "northern territories" was difficult but necessary.

"It is not easy to resolve this task remaining over 73 years since the war. Yet, we need to tackle this," Abe said.

"Keeping in mind your sentiments toward the Northern Territory, we are determined to take a step-by-step approach toward resolving the territorial issue," he said.

Regaining the islands north of Japan's northern main island of Hokkaido has been a priority for Abe and his conservative base. For seven decades, the dispute has prevented Tokyo and Moscow from signing a peace treaty.

Despite the row, Tokyo and Moscow already have vibrant economic relations, with the likes of Toyota and Japanese energy firms heavily invested in Russia, operating major factories and sales networks.

In November, Abe and Russian President Vladimir Putin agreed to accelerate negotiations based on a 1956 Soviet proposal to return two of the islands to Japan.

That suggestion angered Russian nationalists, and last month Russian Foreign Minister Sergei Lavrov warned Japan it must recognize the islands as part of Russia as a starting point for talks.

Abe said the negotiations would continue based on the guidelines agreed to with Putin in order to sign a peace treaty "while people of Japan and Russia strengthen their mutual trust and friendship."

At the rally, Abe spoke in front of a large banner saying "Return the Four Northern Islands." But he did not utter the phrase.

His focus on economic ties and delicate language on the sovereignty issue prompted some islanders to urge him to focus more on the subject, while others saw it as a realistic approach.

"We must not give up. We must demand the return of all four islands," said Kimio Waki, 78, who left his home island of Kunashiri at the age of seven after World War II.

"Joint economic projects are in focus. But there is no path forward as far as the return of the islands goes," he told French Press Agency (AFP). "I want to see results."

While Abe is keen to make progress on the dispute with Russia and find opportunities to cooperate in developing oil and gas and other natural resources, China is the overriding concern, said James Brown, associated professor at Temple University's Japan Campus.

"There is also the concern that the United States, especially under the 'America First' policy of (President Donald) Trump, is somewhat of a less reliable ally than it was in the past," Brown said.

To avoid facing isolation among "hostile" powers such as China, North Korea and Russia, "it seems that Abe has calculated that of those countries, it would make sense to try and normalize relations with Russia and thereby to draw it away from China," he said.