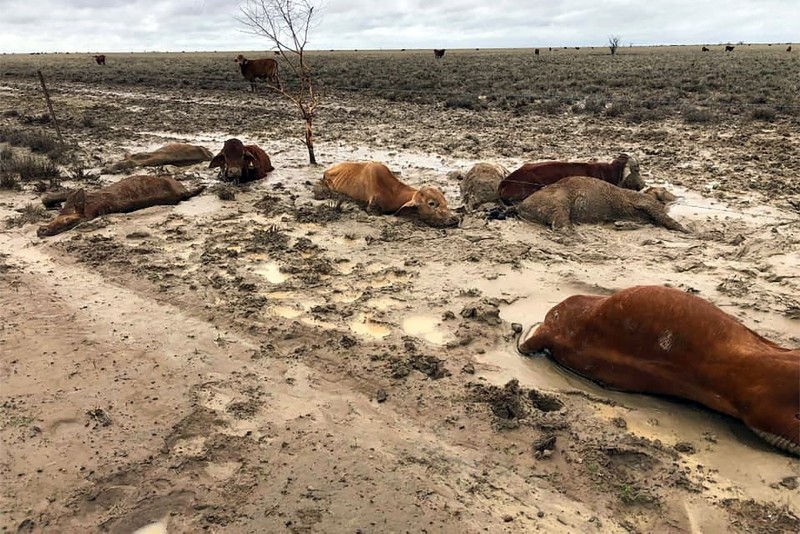 In this Feb. 7, 2019, photo cattle is seen in a flooded area near Julia Creek township in Queensland state, Australia. (AFP Photo/Anthony Anderson)
by Compiled from Wire Services Feb 08, 2019 12:51 pm

Hundreds of thousands of cattle weakened from a severe drought are feared to have died in record-breaking floods in northeastern Australia, authorities said Friday, as they stepped up efforts to feed surviving livestock.

Incessant rains over an almost two-week period have flooded swathes of Queensland state, with the full scale of the devastation on drought-hit cattle stations becoming clearer as floodwaters recede.

"We are expecting hundreds of thousands in terms of stock losses," Prime Minister Scott Morrison told reporters in Sydney.

"This will be heartbreaking to these communities that have been experiencing years of drought, only to see that turn into a torrential inundation which threatens now their very livelihoods in the complete other direction."

Queensland Premier Annastacia Palaszczuk on Friday spoke of seeing a "sea of dead cattle" when she toured one region on Thursday.

"To see the cattle spread across these yards, not moving, it made you feel sick in the stomach," she told national broadcaster ABC.

Pictures posted on social media showed scores of cattle trapped on patches of high ground surrounded by water, or dead and dying in the mud.

Bales of hay and fuel have been transported into towns near the disaster zones and are being distributed to farmers so they can carry out airdrops to their stock.

Farmer Rachael Anderson and her husband, who manage Eddington cattle station near Julia Creek township, said 800 of their 1,500 cattle were still unaccounted for. 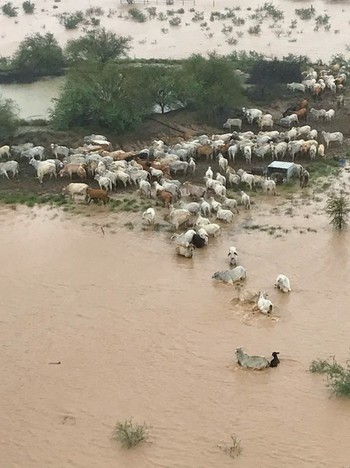 "The cattle didn't have anywhere else to go... We've got a railway line close to us and the whole railway line is just tangled with dead cattle," Anderson told French Press Agency (AFP).

"If the floodwater wasn't enough to kill them, then those that got to higher areas were exposed to elements that were not conducive like rain hitting them at 60 kilometres an hour. They can't survive them long term."

Anderson — who had been hand-feeding cattle over the past few months amid the crippling drought — said there were also many dead kangaroos as well as birds that were falling dead on the ground.

About half of Australia's 25-million strong cattle herd is bred in Queensland state, and graziers say the floods — described as a once-a-century event — could devastate their industry.

"This will finish a lot of people, there's some people who've lost everything, every beast they own, so there's no income at all," farmer William McMillan told the ABC.

Australia's tropical north typically experiences heavy rains during the monsoon season, but the recent downpours have seen some areas get a year's worth of rainfall in just a week.

More than 1,100 people were evacuated this week after authorities opened floodgates at the Ross River Dam when the rains filled reservoirs to overflowing.

A spokesman for global commodities trader Glencore said on Friday there was "short term" production disruption at its Collinsville and Newlands coal operations because of heavy rain.

"Queensland desperately needed rain and now it's had way too much in some areas," said Phin Ziebell, agribusiness analyst at National Australia Bank.

"I just don't think we have enough information at this stage to determine the scale of the stock losses and what benefit that part of the country can get from a bit of pasture," he added.