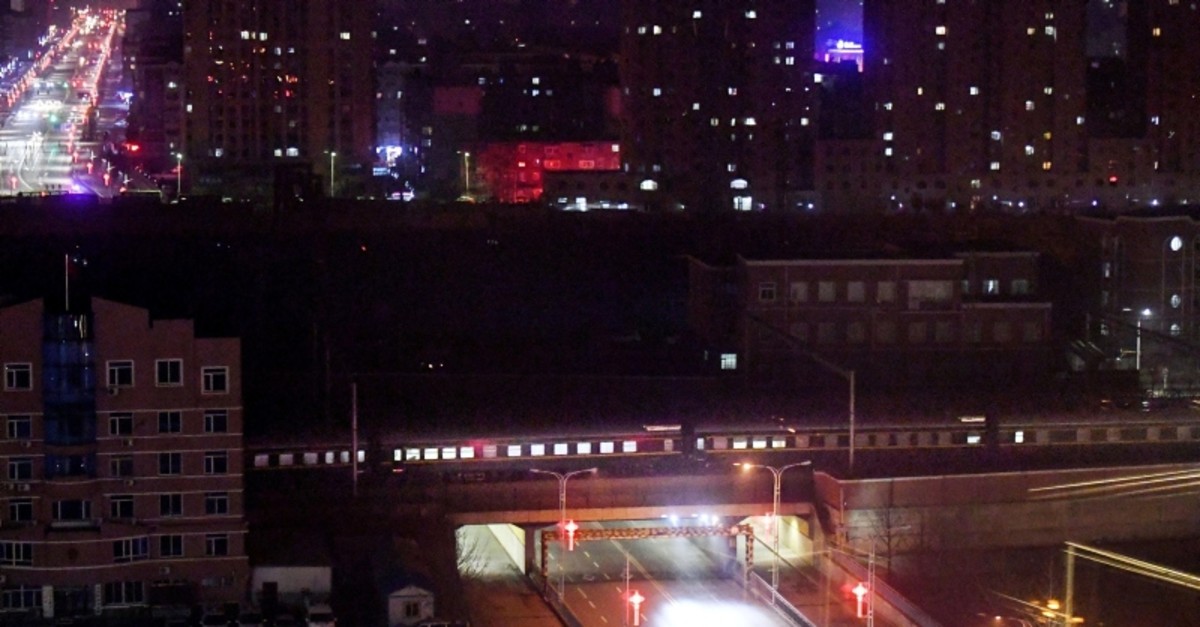 A train believed to carry North Korean leader Kim Jong Un is pictured in the Chinese border city of Dandong, China (Reuters Photo)
by Feb 24, 2019 12:57 am

The train arrived in the border city of Dandong after 9:00 pm local time (1300 GMT), according to South Korea's Yonhap news agency and the specialist outlet NK News.

Accompanying the North Korean leader was right-hand man and top general Kim Yong Chol, who met with Trump in the White House last month, along with several other top dignitaries.

The train's crossing into China follows days of speculation over Kim's travel plans, which remain shrouded in secrecy, as his team gathered in Hanoi ahead of the talks expected next Wednesday and Thursday.

Security was tight before the train's arrival, with police cordoning off the riverfront some 100 meters (yards) from the bridge with tape and metal barriers, and leading an AFP journalist out of the area.

Guests at a hotel facing the rail bridge from North Korea were suddenly asked to leave on Friday and told it was closed Saturday for impromptu renovations.

"The train is long and crossed the bridge slower than the tourist train, but its definitely him, there's a lot of police presence," an unidentified source told NK News.

Windows on the train were blacked out, the source said, with only headlights turned on as it crossed.

Kim has previously traveled in an armored train to Beijing and, if he is on board, may stop in the Chinese capital on what could be an epic journey to Vietnam, meeting President Xi Jinping prior to his second face-to-face with the US president.

Or he could save the meeting for his return trip to debrief his country's sole major ally.

Trump and Kim met in June in Singapore, producing a vaguely worded agreement on denuclearisation, but progress has since stalled, with the two sides disagreeing over what the agreement meant.

Observers say tangible progress is needed in Hanoi to avoid the talks being dismissed as a publicity stunt.

Kim traveled to Singapore last year on a plane lent by Beijing, and it remained unclear whether he would ride all the way to Hanoi by rail -- a nearly 4,000-kilometre (2,500-mile) journey taking more than 60 hours from Pyongyang.

Another option would be to take the train to Beijing and catch a plane to the Vietnamese capital.

But several sources said Kim was expected to arrive in Vietnam by train, stopping at the Dong Dang train station near the China border, then driving to Hanoi.

Soldiers were deployed to Dong Dang station and along the road to the capital, according to AFP reporters at the scene.

Vietnam previously announced the unprecedented move of closing that 170-kilometer stretch of road on Tuesday between 6:00 am and 2:00 pm -- suggesting Kim could travel on the road between those hours.

The Vietnamese foreign ministry said that Kim would "pay an official visit to Vietnam in the coming days."

He is expected to tack on a tour of industrial zones in Vietnam's Quang Ninh and Bac Ninh provinces, sources told AFP.

Rail travel is a family tradition that was started by Kim's grandfather, the North's founder Kim Il Sung. His late father, Kim Jong Il, traveled all the way to Moscow by train in 2001.

"It sends a strong message to North Koreans that Kim Jong Un has inherited his grandfather's good qualities, and the Kim Dynasty is stronger than ever," said Koh Yu-hwan, professor at Seoul's Dongguk University.

Jeong Young-tae of the Institute of North Korean Studies in Seoul said the safest way to travel would be to take a plane provided by Beijing.

"But by choosing to travel by their own special train over a Chinese aircraft, Pyongyang may be signaling its willingness to be independent," Jeong said.

China has one of the most extensive railway systems in the world, with 130,000 kilometers of tracks -- enough infrastructure to circle the Earth three times.

Still, a journey from China's frozen northern border to subtropical Vietnam would present a logistical headache and complex security challenges.

"The best route is the Beijing-Guangzhou line," said Zhao Jian, who studies China's railway system at Beijing Jiaotong University, describing a route that would see Kim travel straight down to southern China, before heading west into Guangxi province, which borders Vietnam.

Justin Hastings, associate professor in international relations at the University of Sydney, said that would be "a pretty major operation."

But China may view the hassle as a necessary cost to get Kim to the summit.

"China wants North Korea to make some steps to denuclearise as much as anyone else," Hastings said.