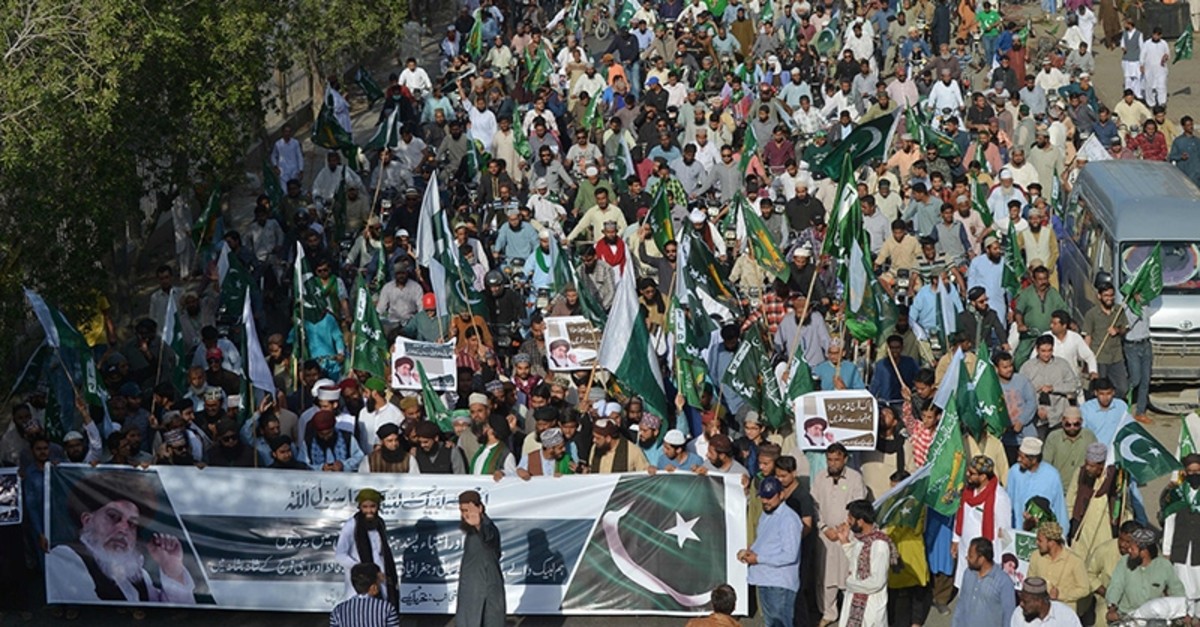 Supporters and activists of the Tehreek-e-Labbaik Pakistan party march during an anti-Indian protest in Karachi on Feb. 24, 2019. (AFP Photo)
by Associated Press Feb 25, 2019 12:13 am

Three militants, a counterinsurgency police officer and an army soldier were killed during a gunbattle in Kashmir on Sunday, officials said, as shops and businesses shut down to protest a sweeping and ongoing crackdown against activists seeking the end of Indian rule in the disputed region.

The fighting triggered large anti-India protests and clashes as hundreds of residents thronged the village of Turigam in the southern Kulgam area while barraging troops with stones. An army officer and two other soldiers were injured in the fighting, which was still raging later Sunday.

Government forces opened fire with shotguns and tear gas to quell the protesters, injuring at least half a dozen civilians, residents and emergency workers said.

Police and paramilitary soldiers also patrolled streets in Srinagar, the region's main city, and enforced a security lockdown in its downtown area in anticipation of protests and clashes.

The crackdown began Friday night. Police are mainly targeting Kashmir's largest political-religious group, Jama'at-e-Islami. The group is dedicated to the right to self-determination for the Himalayan region, which is divided between India and Pakistan but claimed by both in its entirety.

Indian authorities have so far arrested at least 400 Kashmiri leaders and activists, escalating fears among already wary residents that a sweeping crackdown could touch off renewed anti-India protests and clashes. They are detained in police stations and jails across Kashmir.

Among those arrested were Jama'at-e-Islami head Abdul Hamid Fayaz and Mohammed Yasin Malik, an influential pro-independence leader who heads the Jammu-Kashmir Liberation Front.

Sunday's strike was called by the Joint Resistance Leadership, or JRL, which comprises three top Kashmiri leaders, including Malik.

Mirwaiz Umar Farooq, another JRL member, denounced the arrests and said India's latest crackdown would fail as "people won't give up their struggle for freedom."

"India is already at war with Kashmiris. Now they're warmongering with Pakistan. We again warn (Indian authorities) to de-escalate and talk as no force can push us into submission," Farooq said. "There's a going to be serious ramification, a reaction to this (crackdown). It'll force more youngsters to armed militancy."

The crackdown comes amid high tensions between India and Pakistan following the Feb. 14 suicide car bombing of a paramilitary convoy by a local Kashmiri militant. Forty Indian soldiers died in the attack.

India quickly blamed the attack on Pakistan and promised a "jaw-breaking response." Pakistan warned India against linking it to the attack without an investigation, and offered dialogue to resolve all issues, including Kashmir.

Residents fear the crackdown could be a prelude to a military strike by India against Pakistan or tinkering with Kashmir's special status in India's constitution. India's Supreme Court has yet to give its verdict on a petition against the special provision that it has been hearing for more than a year.

Indian authorities rushed about 10,000 additional paramilitary soldiers to the already highly militarized Kashmir Valley. Indian soldiers are ubiquitous in Kashmir and local residents make little secret of their fury toward the presence of the soldiers in the Himalayan region, calling them an occupying force.

State Gov. Satya Pal Malik said in a statement Sunday that the additional troops were deployed for India's general election, due in the next few months.

Referring to the crackdown, he said: "This is purely related to the (Feb. 14) attack. The response of security forces is guided solely by the need to counter both the impact and any further action that may be taken by terrorist groups who are still out to disrupt our country."

Opposition groups have been fighting since 1989 against Indian control in Kashmir.

About 70,000 people have been killed in the uprising and ensuing crackdown. Most Kashmiris support the opposition's demand that the territory be united either under Pakistani rule or as an independent country, while also participating in civilian street protests against Indian control.