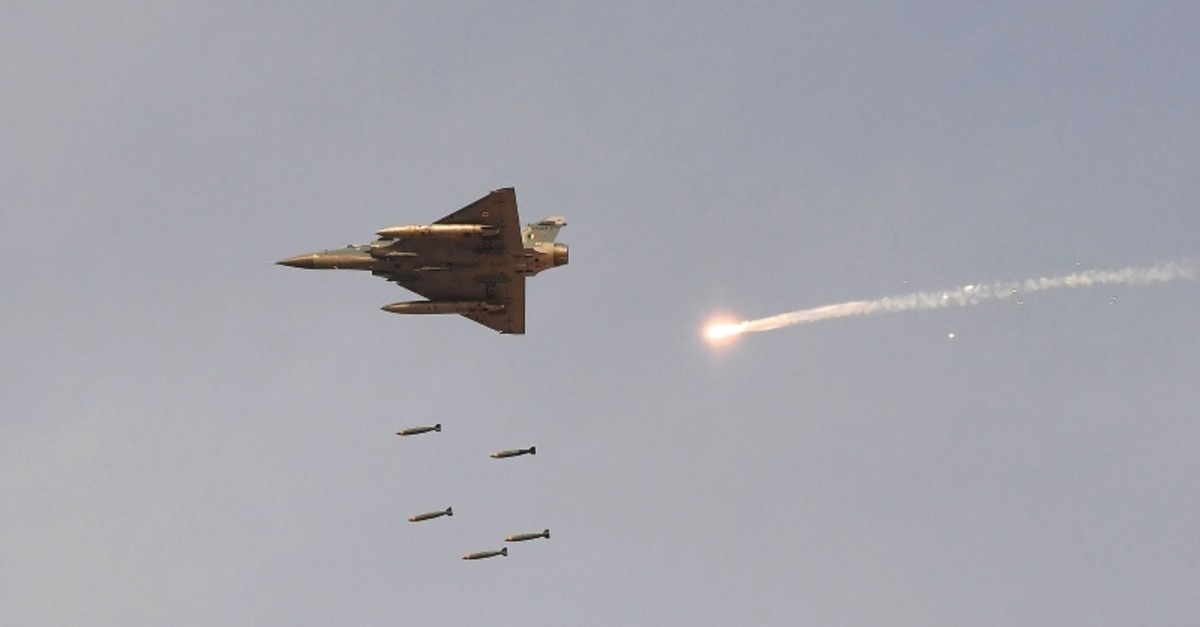 The incursion across the cease-fire line that divides Kashmir between the nuclear-armed neighbors came after India threatened retaliation over a Feb. 14 suicide bombing claimed by the Pakistan-based Jaish-e-Mohammad (JeM) group, that killed 40 troops in Indian Kashmir.

The escalation triggered international alarm, with the European Union calling for the arch-rivals to show "restraint."

New Delhi said its jets had hit a JeM training camp and killed "a very large number" of militants training to stage suicide attacks in India.

Pakistan said it scrambled its fighters to push back the intruders and denied India's claim of heavy casualties, branding it "self serving, reckless and fictitious." Foreign Minister Shah Mehmood Qureshi said his country would "respond at the time and place of its choosing."

Pakistan military spokesman Major General Asif Ghafoor said on Twitter that the Indian jets had crossed the Line of Control that divides Indian- and Pakistani-administered Kashmir and that they had released a "payload in haste while escaping" near Balakot.

He did not say what was meant by a "payload" and images he posted on Twitter appeared to show pieces of metal and displaced soil in a heavily forested area.

India's foreign ministry also said the camp was at Balakot, but gave no further detail and the exact location remained unclear.

Balakot is in Pakistan's northwestern Khyber-Pakhtunkhwa province, a few kilometers outside of Pakistan-administered Kashmir.

A strike inside undisputed Pakistani territory would be a serious heightening of the rivalry that has existed since they divided after independence from Britain in 1947, analysts said.

The purported attack was India's first use of air strikes against Pakistan since 1971, when the two went to war over Bangladesh's independence.

Modi, who is expected to call an election in April, had threatened a "jaw-breaking" response to the Feb. 14 attack.

But at a rally in Rajasthan on Tuesday, the Indian leader did not directly mention the strike. He paid tribute to the military and said: "I assure the nation that the country is in safe hands."

Other top Indian officials said the strike displayed the country's determination to act against Pakistan -- which New Delhi accuses of using militants as proxies against it.

"They say they want India to bleed with a 1,000 cuts. We say that each time you attack us, be certain we will get back at you, harder and stronger," said foreign affairs minister of state, Vijay Kumar Singh, a former head of the Indian army.

While India has consistently accused its neighbor of supporting extremist groups, Pakistan has equally vehemently denied any role in attacks in India and its only Muslim-majority state, Kashmir.

This is the biggest crisis between the neighbors since 2016, when Pakistan-based militants attacked an Indian army camp in Kashmir, killing 19 soldiers.

In response, India launched what it called "surgical strikes" in Pakistan Kashmir. Pakistan denied the strikes ever took place.

"If such actions continue, it can escalate into major conflict, which will not serve any purpose but to plunge the region into serious crisis," he said.

However, Samir Saran, president of the Observer Research Foundation think tank in New Delhi said the fact that India remained vague over the exact spot it had targeted was a sign that New Delhi did not want an all-out conflict.

"This is to take the pressure off Pakistanis. We are still telling them that we don't want an escalation. Which is why we have said that we have taken a preemptive measure. You don't have to make this into a war, if you don't want to," he said.