1 killed, 60 feared buried in illegal mine collapse in Indonesia 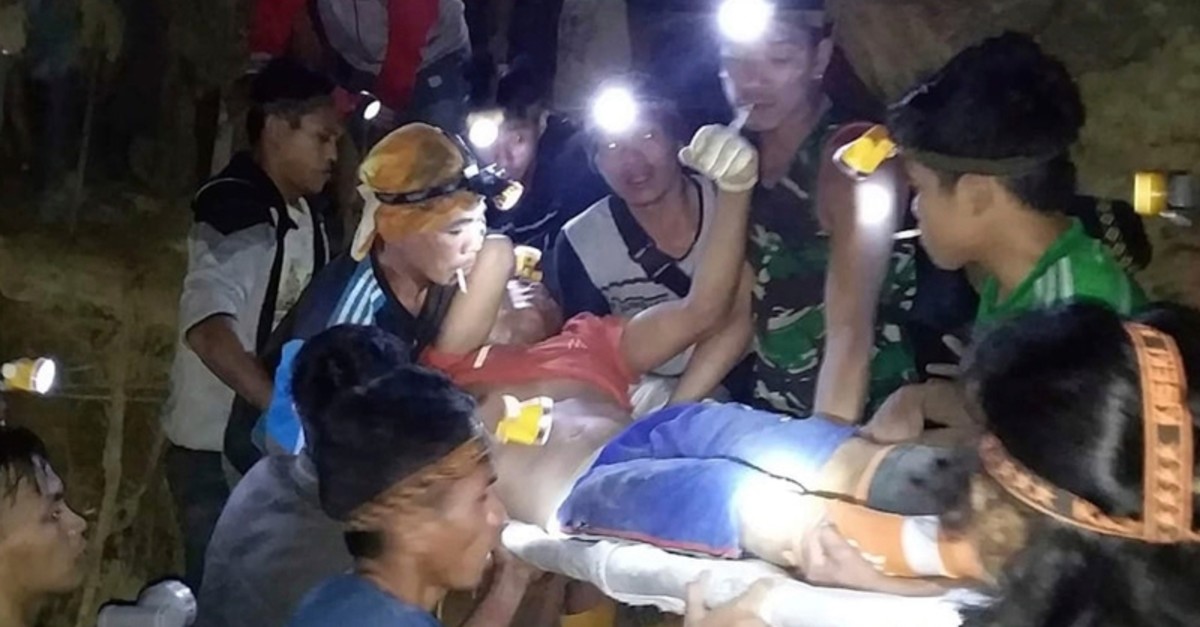 In this undated photo released by Indonesian Search And Rescue Agency (BASARNAS) rescuers evacuate a survivor from a collapsed gold mine in Bolaang Mongondow, North Sulawesi, Indonesia. (AP Photo)
by Associated Press Feb 27, 2019 9:41 am
An unlicensed gold mine in Indonesia's North Sulawesi province buried dozens of people, a disaster official said Wednesday, as emergency personnel dug with bare hands and farm tools as they desperately sought to unearth victims calling for help from beneath the rubble.

Local disaster official Abdul Muin Paputungan said one person was confirmed dead and 14 people with injuries ranging from light to serious had been rescued. As many as 60 people were buried, he said.

"Unstable soil conditions make us extra careful lifting rocks because it can lead to new landslides," Paputungan told The Associated Press. "We still hear voices crying for help from people beneath the rubble," he said.

"Survivors estimated about 60 people are trapped in the rubble of the mining pit," Paputungan said.

Makeshift wooden structures in the mine in Bolaang Mongondow district collapsed on Tuesday evening due to unstable soil and the large number of mining holes, burying people in the mine pit.

Informal mining operations are commonplace in Indonesia, providing a tenuous livelihood to thousands who labor in conditions with a high risk of serious injury or death.

Miners often burrow straight into hillsides with scant supports and children often are sent into the tunnels to dig and carry out ore hacked from rock faces.

Police, search and rescue agency workers, military and Indonesian Red Cross personnel were all taking part in the rescue effort but the remote locale was complicating the operation.

Paputungan said the mine and a village connected to it are in a steep area that can only be reached by foot. Earth-moving equipment and ambulances can't reach the location, he said.

Indonesia accounts for about 3 percent of world gold production. Most of that comes from the Grasberg mine in Papua province, said to be the world's largest gold mine with $40 billion in reserves and up to 20,000 workers.

But small artisanal, often unauthorized mining is on the rise in many parts of Asia and Africa: a study by a task force, the Intergovernmental Forum on Mining, Minerals, Metals and Sustainable Development found the number of people engaged in such mining had risen to over 40 million, up from 30 million in 2014 and 6 million in 1993.

Landslides, flooding and collapses of tunnels are just some of the hazards in such mining: much of the processing of gold ore involves use of highly toxic mercury and cyanide by workers using little or no protection.