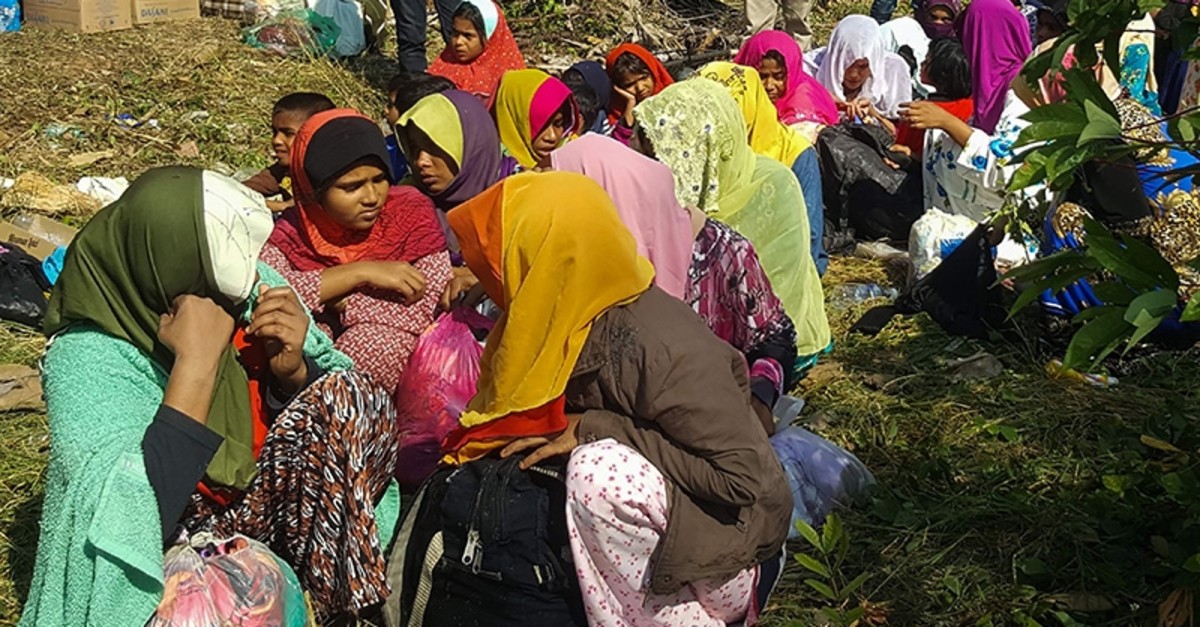 Rohingya refugees, who landed on an isolated northern shore near the Malaysia-Thai border, huddle in a group in Kangar on March 1, 2019, following their detention by Malaysian immigration authorities. (AFP Photo)
by Associated Press Mar 01, 2019 7:05 pm

More than 30 Muslim Rohingya women and children were found stranded along a beach in Malaysia's northernmost state early Friday, and are believed to have been dropped off by human traffickers, authorities said.

A police official in Kangar, the capital of northern Perlis state, said villagers found the 34 people, including nine children, weak, hungry and covered in mud as they made their way through the muddy coast.

The official, who declined to be identified due to the sensitivity of the issue, said the group was believed to have come from Thailand. He said they have been fed and handed over to immigration officials.

Nur Aziah Mohamad Shariff, an official with the National Security Council, said it is aware of the illegal entry and is investigating.

A Myanmar welfare group said the group is believed to have been trafficked into Thailand from Bangladesh, before heading to Malaysia, whose dominant Malay Muslim population makes it a sympathetic destination.

Zafar Ahmad Ghani, who heads the Myanmar Ethnic Rohingya Human Rights Organization of Malaysia, said he obtained information that many more Rohingya are being tricked by traffickers into leaving Bangladesh after being warned they may face death if repatriated to Myanmar.

Pictures and videos obtained by members of the group showed a long rope placed across the muddy shore at low tide to help the Rohingya walk through the mud.

More than 700,000 ethnic Rohingya have fled from Myanmar to Bangladesh since August 2017, when a group of militants attacked security forces, triggering a massive retaliation by Myanmar's army. The exodus came after hundreds of thousands of other Rohingya escaped previous bouts of violence and persecution.

Chris Lewa, founder of the Arakan Project which works to improve conditions for Rohingya, said the women and children may be part of a large group that sailed from Bangladesh in two boats in mid-February. She said the total number of passengers was unclear, with estimates of about 150, and that it was unclear what happened to the others.

She said the Arakan Project spoke to a Rohingya man who landed in northern Malaysia in late February on a boat that had arrived undetected with 85 aboard.

Lewa said it was unclear why the women and children were stranded, and that the two boats were the only ones they knew had sailed from Bangladesh this year.

Most people in Buddhist-majority Myanmar don't accept Rohingya Muslims as a native ethnic group. They are, instead, viewed as having migrated illegally from Bangladesh, though generations of Rohingya have lived in Myanmar.

Nearly all have been denied citizenship since 1982 and lack access to education and hospitals.

Myanmar's government denies claims of genocide and ethnic cleansing. The country rejects the U.N. investigators' work and the General Assembly resolution as biased.